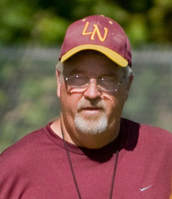 Mike Russell began his teaching career at Lutheran North High School in 1972. His first coaching assignment was as head coach of junior varsity football. In the spring he was an assistant for freshman baseball.

Mike became the head baseball coach at North in 1975 and served in that capacity for 39 seasons. His teams won a total of 528 games, 16 district championships and six ABC League championships.

Despite never playing organized football himself, Mike coached the Crusaders’ JV football teams for five years and was named head football coach in 1977.

In 24 seasons as head coach, Russell’s teams won more than 70 percent of their games and posted 20 consecutive winning seasons. In 1979, the Crusaders made their first-ever Missouri state tournament appearance.

Among his Coach of the Year awards in football were from the Sporting News, AP, and National Federation High School Association. Russell was inducted into the Metro St. Louis Football Coaches Association Hall of Fame in 2005.

Russell retired in 2013 after 41 years at Lutheran North. In addition to coaching baseball and football, he taught physical education and health, served as department head, and was director of athletics for over 30 years.

In retirement he has enjoyed spending time with his wife (Bonnie), traveling, attending Cardinal’s spring training in Jupiter, Florida, pickleball, golf and attending sporting events at Lutheran North or for one of their 10 grandchildren.