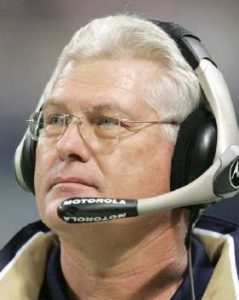 He is best known as the offensive coordinator behind the 1999 St. Louis Rams high-powered offense – a fast-paced, quick-striking offense that was nicknamed “the Greatest Show on Turf” by the media – that won the Super Bowl. But as a head coach in the NFL, Martz’s St. Louis Rams also teams compiled a 56–36 record during his five seasons. Overall, Martz’ Rams reached the playoffs four times and won two division titles, including two NFC championships and winning Super Bowl XXXIV and falling to New England in Super Bowl XXXVI.

In 1992 Martz was hired as QB coach for the LA Rams, holding that post through 1994. In 1995, when the team moved to St. Louis he was hired as wide receivers coach. Under his teaching Isaac Bruce exploded onto the NFL scene, going fro 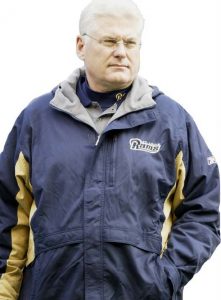 m 21 receptions in 1994 to 119 and 1781 yards in 1995 and was voted to his first Pro Bowl in 1996. Martz left the Rams in 1997 to become quarterback coach at the Washington Redskins, but was hired back as the offensive coordinator of the Rams by Dick Vermeil. During that season, Martz’s No. 1 ranked offense scored 526 points, the fourth highest in NFL history. “I can’t think, in my history of coaching, of any assistant who came into an NFL franchise and made the immediate impact that Mike Martz did,” Vermeil said.

Martz was named head coach of the Rams for the 2000 season. He led the Rams to a 10–6 regular season record, but they lost in the first round of the playoffs to the New Orleans Saints. The Rams cruised to a 14–2 record in 2001, quarterbacked by league MVP Kurt Warner, and won the NFC West snd the NFC championships, before losing Super Bowl XXXVI to New England.

In 2002, the Rams had a see-saw season in which Kurt Warner played injured and committed an unusually high number of turnovers. But the Rams bounced back in 2003 (Marc Bulger’s first full year as a starter) posting a 12–4 regular season record and made the playoffs. However, the Rams lost to Carolina in double overtime in the NFC divisional playoffs.

The Rams squeaked into the 2004 playoffs with an 8-8 record Bears, making NFL history by becoming the first team with a non-winning (regular season) record to win a postseason game. On October 10, 2005, Martz took a leave of absence from the Rams to treat a persistent bacterial infection in his heart. It was Martz’ last days as head coach of the Rams. Despite being on leave, Martz also periodically appeared in-person at team practices late in the season. Martz was given medical clearance to coach the Rams’ last regular season game, on New Year’s Day, 2006; however, management refused to let him do so, and fired him the day after that game.