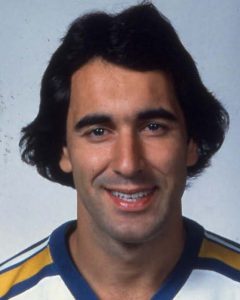 The St. Louis Blues have seen a lot of goaltenders come and go over the past half-century. But none had a more profound impact on the team and the city than Mike Liut.

Liut began his St. Louis journey in 1979 after a successful collegiate career at Bowling Green State University. He was drafted by the Blues in 1976 (56th overall), but opted to turn pro with the Cincinnati Stingers of the World Hockey Association. He spent two seasons there and, after the WHA and NHL merged, the Blues reclaimed his rights in 1979. Then Blues GM Emile Francis had believed in Liut’s abilities and the move launched a long association with the goaltender, who wasted no time displaying his immense talent between the pipes for St. Louis.

His career with the Blues began in 1979-80 under legendary Coach Red Berenson. Liut won 65 regular season and five playoff games over the next two seasons as the young, talented team, led by Bernie Federko and Brian Sutter, electrified hockey fans in St. Louis. His shining moments as a Blues player came during the 1980-81 season, when his stellar play was the cornerstone of a 107-point campaign that was, at that time, the best in club history. That season, Liut posted a record of 33-14-13 with a 3.34 goals against average. The Blues finished second to the eventual Stanley Cup champion New York Islanders in the overall standings. 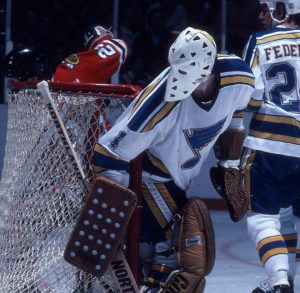 Liut battled Pittsburgh’s Greg Millen in a dramatic, five-game first round playoff series that the Blues clinched in double-overtime on a goal by Mike Crombeen. The Blues lost in five games to the New York Rangers in the second round, but Liut had established himself as one of the NHL’s elite goaltenders. In fact, he nearly won the Hart Trophy as the NHL’s Most Valuable Player that season, finishing second to Edmonton’s Wayne Gretzky by one vote – the closest balloting in the award’s history. Liut was voted a First Team All-Star and won the Lester B. Pearson Trophy as the league’s MVP determined by his peers.

In 1985, Liut was reunited with Francis when the Blues traded him to the Hartford Whalers for Millen and forward Mark Johnson. In his second season with the Whalers, Liut led the league in shutouts with four. He also posted the league’s best goals-against average (2.64) in 1989-90. He was traded to Washington in 1990 and retired in 1992.

Following his playing career, Liut joined the University of Michigan as an assistant coach to Berenson in 1995-96 until the end of the 1997-98 season. He went back to school and earned his law degree and currently works as a sports agent with Octagon. His clients include Blues star forward Vladimir Tarasenko.