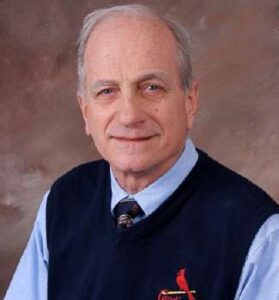 He joined the Cardinals in 1957 as an office boy at the old Sportsman’s Park, and was the longest tenured front-office member. He moved into a full-time position in 1966 in the Busch Stadium ticket office. During his 63 years with the Cardinals, Mike has served as assistant ticket director, ticket director, director of tickets & operations, and director of stadium operations.

Mike was enshrined in the CBC Hall of Fame in 1999 and the Quincy University Hall of Fame in 1970. He was awarded the BBWAA Good Guy Award in 2004 and the Robert Hyland-Rick Hummel Award for Meritorious Service to Baseball in 2012.

Mike prides himself on being a life-long Roman Catholic and foster parent for 21 years. He graduated from CBC High School in 1961 and earned his bachelor of science degree in business management from Quincy College in 1966.

Mike has been married to his wife Sandy for 51 years. They have two daughters and two adopted daughters, one adopted son, and five granddaughters.