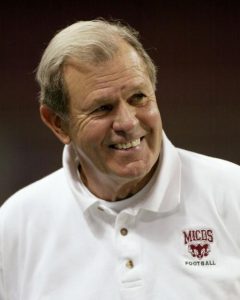 Ron Holtman, who coached high school football for 50 years in the St. Louis area, including 39 at Country Day School (now MICDS), was named the winner of the Metro Legends Award.

Holtman, who retired from coaching in 2007, captured seven Missouri State High School football championships in 10 final appearances while at Country Day and Mary Institute and St. Louis Country Day School (MICDS). In all, Holtman-led teams earned the right to play in 16 state playoffs.

While at MICDS, Holtman posted a record of 321-69-5 and had an overall mark of 382-101-8, which included an 11-year stint at Alton (Ill.) Marquette High School. His total victories by 2004 ranked first among active Missouri coaches and second all-time (trailing only Jefferson City’s Pete Adkins, who was retired by that time) in state history.

A graduate of St. Louis University, Holtman also taught history and coached golf, leading the Rams to five state titles in that sport – in 1990, 1992 and then three straight in 2004, 2005 and 2006. He has also work in the school’s development office. “It’s been a work of love, not a job,” Holtman said upon the announcement of his retirement. “I’ve enjoyed every aspect of my career, including administration, coaching and teaching.

”Perhaps Holtman’s most memorable victory on the football field came in his final game when MICDS overcame a 25-point deficit en route to a 45-42 double-overtime victory over Harrisonville to win the 7th state title of his illustrious career.

MICDS dedicated the Holtman Athletic Fields in 2001 when it upgraded its outdoor athletic facilities. He continues to assist in the MICDS Development Office with special projects and often attends alumni gatherings.