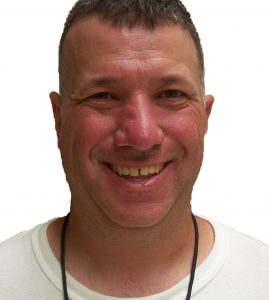 As an athlete since the age of 9, Matt Krippel is now, at the age of 43, one of Special Olympics Missouri’s standout athletes.

A resident of Columbia, Ill., Matt competes in basketball, track and field, softball and swimming in the St. Louis metropolitan area. He qualified for the opportunity of a lifetime earlier this year, travelling to South Korea to represent Team Missouri at the 2013 Special Olympics Winter World Games as a downhill skier.

His accomplishments on the ski slopes were celebrated with a local parade when he returned from South Korea earlier this year.

Previously, he competed with Team Missouri in the 1991 World Games in Minneapolis, Minn., as a swimmer. In all, Matt has been involved with the Special Olympics for more than 30 years.

Matt, who has a development disability, is also a staple of the community in his hometown of Columbia where he is employed by the local Market Place grocery store. He is also an assistant with the Columbia High School football team, where he can be seen working the sidelines during games.

In addition, he is a helper with the Columbia Volunteer Fire Department. Matt recently received a plaque for being named CVFD Honorary Fireman for 2012.

Everyone in town knows Matt for his smiling face, his athletic ability and his eagerness to help anyone in need.

Matt has said he is extremely proud to have been offered this opportunity.

Matt has met countless new friends from all around the world, and tried new things he may not have otherwise tried if not for his participation with Special Olympics Missouri.

Congratulations to Matt for all he has accomplished, and for his induction into the St. Louis Sports Hall of Fame!