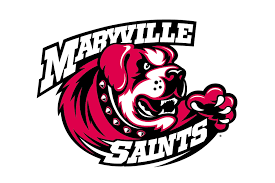 The Maryville University women’s basketball program has been one of the most dominant programs in the St. Louis Athletic Intercollegiate Conference (SLIAC).

The Saints made five NCAA Division III Tournament appearances and set an all-time, all-divisions record with 92 consecutive conference victories. Maryville did not lose a SLIAC conference game between Jan. 15, 2004 and Feb. 24, 2009. In fact, the streak did not end with a loss. It ended when Maryville University moved up in classification.

When Maryville decided to move up to Division II, the Saints joined perhaps the best league in the country in the Great Lakes Valley Conference (GLVC).

After a three-year transition period, the Saints made an impact in their first year of post-season eligibility. The Maryville women won four games in four days to storm to the 2012 GLVC Tournament title and earn the university’ 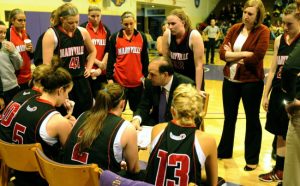 To prove it was not a one-time occurrence, the Saints won the GLVC West Division crown for the first time. Despite losing their top player, All-American forward Abby Duethman, the Saints made another GLVC Tournament run. Maryville reached the finals of the 2013 tourney before succumbing to the top seed.

The Saints’ prowess hasn’t been only on the basketball court. The teams have also excelled in the classroom. In addition to the sterling success on the court, the Saints have been outstanding in the classroom. Maryville has earned the WBCA Top 25 Team Academic Award nine times and was the No. 1-rated team in the country in 2008-09 with a combined team grade point average (GPA) of 3.625.

Directing this run of success is head coach Chris Ellis. The Maryville alum (class of 1984) is the school’s winningest coach with 209 victories. Ellis was inducted into the Missouri Basketball Coaches Association Hall of Fame in 2012.

A former girls basketball coach at Parkway West and Webster Groves high schools, he was named to the Keep Hoop Alive magazine’s Hall of Fame in 1999 for his contributions to women’s basketball in St. Louis.