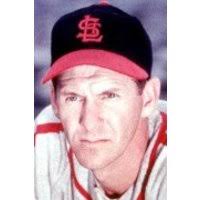 Marty Marion, the premier defensive National League shortstop of his day and the NL Most Valuable Player in 1944, won four pennants, three World Championships with the St. Louis Cardinals. He also managed the Cardinals and St. Louis Browns.

Marion made his debut in 1940 with the Cardinals. Within the next couple of seasons, he started to establish himself as one of the top shortstops in the league. In 1942, Marion led the league in doubles with 38. From 1941 through 1949, the Redbirds never finished lower than second with Marion at shortstop. Nicknamed “Slats,” Marion was named to seven successive NL All-Star squads, and at 6-feet, 2-inches and 170-pounds, he disproved the theory that shortstops had to be small men. His unusually long arms, which reached for ground balls like tentacles, prompted writers to dub him “The Octopus.” 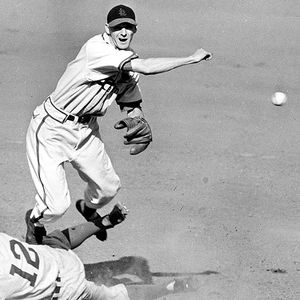 Joe Torre, who also played for and managed the Cardinals, remembered Marion as the franchise’s gold standard for defense. “Around St. Louis there’s a sense of the history of the game,” Torre said. “He was the one you measured against.” Hall of Fame second baseman Red Schoendienst played alongside Marion from 1945-50 and also said Marion should have received that honor. “You look at his stats and everything, he should be in the Hall of Fame,” Schoendienst said. “He never ever tried to say that he belonged in the Hall of Fame. He liked baseball, that’s why he played it. “It was a big break for me to come up as a rookie and play second base with him playing short,” Schoendienst said. “That was good, made it easier for me.”

Martin Whiteford Marion was born in Richburg, S.C., on Dec. 1, 1917. He was 22 when he made it to the major leagues on April 16, 1940. Schoendienst’s rookie season was 1945, the year after Marion led the way with airtight defense in a six-game World Series victory over the cross-town Browns. The Cardinals committed just one error in the series.

In 1960, Marion tried his hand at a different side of baseball. He purchased the Cardinals’ AAA affiliate Houston Buffs of the American Association. A few years later, he sold the team back to the Cardinals’ franchise. He also performed as the manager of the Stadium Club at the old Busch Stadium.

(Portions of this article provided by The Associated Press)