A winner of more than 100 international or national racquetball titles and six United States National Championships during his dominating 14-year professional career, Marty Hogan was ranked either No. 1 or 2 in the world from 1976 to 1990.

The St. Louis-born, San Diego-raised Hogan revolutionized the sport of racquetball, changing it from a control game into a power game. He is an athlete who, competitors say, was able to jump both horizontally and vertically at the same time, while driving a ball as fast as 142 miles per hour.

Marty, who started playing racquetball at the St. Louis Jewish Community Center, turned pro in 1975 and became racquetball’s first millionaire. In 1989, he captured his final national racquetball title and retired the following year. At the time of his retirement, he was the  sport’s all-time leading money winner. 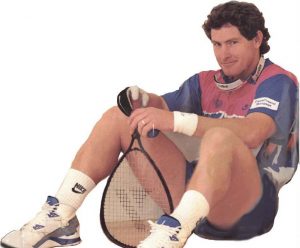 National Racquetball Magazine ranks Marty the No. 1 player of all time. Oh sure, there were and are other good players, but ask the man on the street, and if he knows any racquetball player, he’ll know Hogan, the once brash, racquet-smashing teenager now a confident, astute young businessman.

Hogan endorsed everything anyone could possibly use on the racquetball court. He has his own line of equipment. He has real estate holdings, including his own ranch outside St. Louis. His book and video, “Power Racquetball,” have become the best-selling instructional tools in the sport.

In 1987, Hogan even co-sponsored his own amateur racquetball tournament series and had plans for a new professional tour to rival the existing RMA-sponsored tour. Said Hogan: “This is something I feel has to be done in order to save professional racquetball.”

Hogan will tell you he’s not above the game, that professional racquetball goes on without him, but he also said he has a responsibility to the game, and he intends to go about fulfilling that responsibility his way. “I’m not doing this because I want to take over,” Hogan said. “In no way, shape or form do I want to limit professional racquetball, but I want us to grow to be as big as we can.

Quite frankly, I’m willing to make the changes and take the consequences. I’m willing to take any negative press (the RMA) gives me. “For racquetball, negative press is better than no press at all. Then maybe someone else can make it into Who’s Who compete in any one of nine men’s, three women’s and two doubles divisions.

There’s prize money for the winners of the open division, but this is basically a grass-roots event. The ultimate goal for this program is to have a national tour of charity events that, hey, I could sort of say we’re helping a lot of people, a lot of good causes,” Hogan said. “We want to keep it to a national participation kind of deal entice people, but this isn’t just for the top dogs of the sport.”