Martin Luther Mathews is the co-founder and emeritus president of the Mathews-Dickey Boys’ & Girls’ Club. Mathews work over the past 60 years has impacted over a million young lives and has been recorded in the recently released biography, “I Trust You with My Life,” available on-line at ItrustYouWithMyLife.com. One of Mathews favorite sayings is “what you do for yourself dies with you and what you do for others lives on forever.” These are certainly words by which he’s lived his life.

Mathews first involvement with youth programming came at the death-bed invitation of a fellow neighborhood baseball coach who summoned him to his house. He molded this team into semi-pro three-state champions who won five games in one day. More importantly, the members of the Knights became successful FBI agents, educators, business people, lawyers, etc.

It was this experience and a chance encounter with Mathews-Dickey co-founder “Dickey” Ballentine under a shade tree that demonstrated to Mathews the importance of giving ALL CHILDREN a chance. In the talk, they learned that the children on their teams weren’t getting into as much trouble as youth with nothing to do. 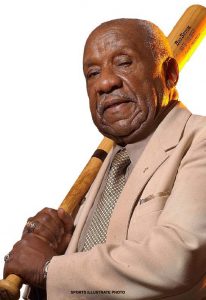 And, so Mathews-Dickey was founded upon this simple-yet-vital premise in 1960. Since then the Club has played an important role in the forefront of efforts to combat teen idleness. A champion for youth, Mathews has forged strong relationships with business and community leaders and developed numerous innovative programs like the Volunteer Tutorial, which supplies youth with math, reading and language arts “study buddies” and computer literacy Instruction to tackle the digital divide through technology training.

An avid sportsman, Mathews built strong relationships with the Junior Football and Khoury baseball leagues. He also collaborated with Major League Baseball and the St. Louis Cardinals officials on the creation of the Reviving Baseball in the Inner Cities (RBI) Program in 1992 and subsequent hosting of the first World Series.

A firm believer in youth employment opportunities Mathews founded Earn and Learn to help them earn money as managers, coaches, scorekeepers and umpires. In an effort to reduce gang violence, he collaborated with the Federal Bureau of Investigation (FBI) in 1992 to establish Motivation, Vocation and Preparation (MVP).

In 1982, the Club was declared a model for the country by President Ronald Reagan. And in 1998 President Bill Clinton’s White House lauded it as a 21st Century Learning Center. U.S. Vice Presidents Joe Biden and Dan Quayle recognized the Club’s “The Sky is the Limit,” “Maleness to Manhood Workshop Series,” career, leadership and mentoring programs. Mathews’ advice is frequently sought by local, national and worldwide leaders on successfully instituting youth programming and forging corporate/community partnerships.

Under his leadership and tutelage, the Club helped give birth to City Academy and the St. Louis Law Internship Program. Mathews is also a recipient of honorary doctorate degrees from St. Louis University, Washington University, Webster University and the University of Missouri — St. Louis.