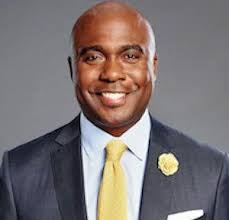 Marshall Faulk has become synonymous with the St. Louis Rams Super Bowl championship. The versatile running back not only was one of the game’s premier runners, he was also an excellent receiver who was a target for countless Kurt Warner passes and helped define the Rams’ offense as “The Greatest Show on Turf.”

Before entering the NFL, Faulk set numerous offensive records at San Diego State, where he scored 62 career touchdowns to rank second on the NCAA’s all-time list. Faulk was selected by the Indianapolis Colts with the second pick in the 1994 NFL draft. He made an immediate impact, rushing for 1,282 yards and 11 touchdowns, and catching 52 passes for 522 yards and another score. In 1996, he amassed over 1,500 yards of total offense. In 1998, he began the first of what would become an NFL-record four consecutive seasons with more than 2,000 yards of total offensive.

Faulk was traded to the St. Louis Rams after the 1998 season and he picked up right where he left off with the Colts: 1,381 yards rushing and 1,048 yards receiving. That season he was named the NFL’s Offensive Player of the Year and 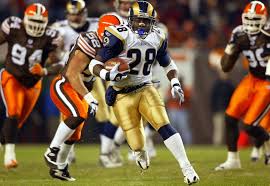 helped the Rams win the Super Bowl. Faulk was named NFL MVP in 2000 with over 2,000 yards of total offense and 26 touchdowns, which at the time was an NFL record. He continued to churn out the yards over the next four seasons, but his career ended after undergoing reconstructive knee surgery. Faulk, a seven-time Pro Bowl selection, finished his illustrious career with 12,279 career rushing yards (ninth all-time), 100 career rushing touchdowns (seventh all-time), 6,875 receiving yards, 36 receiving touchdowns and 19,154 total yards from scrimmage (fourth all-time).

In his first year in St. Louis, Faulk was the catalyst for “The Greatest Show on Turf”, a nickname given to the Rams spread offensive formation, innovated by then-coaches Dick Vermeil and Mike Martz. In this offense Faulk generated some of the best all-purpose numbers in NFL history. He totaled an NFL-record 2,429 yards of offense, surpassing Barry Sanders’ record of 2,358 yards set in 1997 with the Detroit Lions. With 1,381 yards rushing (5.5 yards-per-carry average), 1,048 receiving yards, and 12 touchdowns, Faulk joined Roger Craig as the only men to total 1,000+ yards in each category in a single season.

The Rams would go on to defeat the Tennessee Titans in a thrilling Super Bowl XXXIV. In that game, Faulk was held in check on the ground by a tough Tennessee defense, which limited him to just 17 rushing yards. But the Titans couldn’t stop the Rams passing game and which Faulk was a major component, recording five receptions for 90 yards – the second highest receiving yards ever compiled by a running back in the Super Bowl. He was also instrumental in Isaac Bruce’s winning TD catch. Replays showed Faulk delivering a last-second block on defensive rookie of the year Jevon Kearse, which allowed Warner just enough time to release the ball. Faulk’s exploits earned him the NFL Offensive Player of the Year award and a starting berth on the NFC squad in the 1999 NFL Pro Bowl.

The following year, Faulk became the first running back in NFL history to lead his team in receptions over five separate seasons (three in Indianapolis and two in St. Louis). In addition to this remarkable achievement, Faulk was the MVP in 2000, and again earned Offensive Player of the Year honors. He had 1,359 yards rushing in 14 games and established an NFL record with 26 touchdowns, including a franchise record 18 on the ground and eight through the air.