Over 150 years of major league baseball history, and over 218,000 games played, there have been 23 official perfect games. In the so-called modern era of baseball (since 1900) there have been just 21 perfect games. Mark Buehrle has one of them, July 23, 2009. In his next start, he followed up the perfect no-no with 5 and 2/3 perfect innings to set the major league record for consecutive batters retired at 45.

Buehrle was born and raised in St. Charles, a big Cardinal fan. He liked watching John Tudor, Joe Magrane and his favorite back then—Todd Worrell pitch. Mark failed to make his high school team in his first two years at Francis Howell North. He was barely five feet tall. Who could have possibly dreamed that this little kid would go up to be 6-2 and win 214 games in 16 major league seasons, much less throw a no-hitter and a perfect game?

But Mark Buehrle grew up fast. He pitched well enough at Jefferson College in Hillsboro, Missouri that the Chicago White Sox noticed and selected him in the 38th round of the 1998 draft. Not exactly super star status but he was a professional. 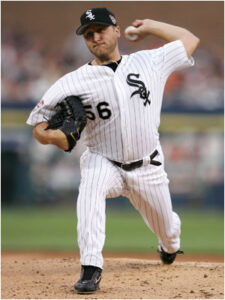 For baseball scouts who rely on the radar gun, Mark was a never going to make it. But he fooled them with a curve, slider, cutter, and a changeup to go with a fastball in the mid 80’s. He pitched to contact and fashioned a superb pickoff move. He was also remarkably durable. For 15 straight seasons, he started over 30 games and for 14 years in a row, he logged over 200 innings. He never spent much time in the trainer’s room. In all the years, he was never on the disabled list.

Buehrle, despite his low draft position, fast tracked to the majors. Two years later he was in the majors with the White Sox and in 2001 he won 16 games and was an ace in Chicago.

He spent most of his major league career in Chicago with the White Sox. He was 2-0 with a save in the White Sox post-season in 2005 when they won the World Series. He finished his remarkable career with one season in Miami and four in Toronto. In his last season, 2015, he won 15 games for the Bluejays with a .381 ERA.

He was a five-time all-star, four-time gold glove winner and finished with an impressive .381 career earned run average. And, for a lefty who didn’t burn up radar guns, he struck out 1,870 hitters in 3,283 innings. Not bad for a kid who was cut twice by his high school team.