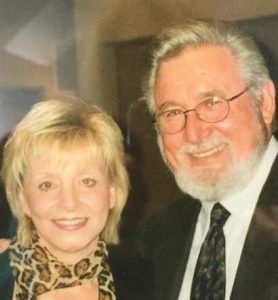 The St. Louis Men’s Group against Cancer is celebrating its 50th anniversary this year. The group was founded by a small group of men who initially held a dinner dance once a year to raise money for cancer research at AMC Cancer Research Center in CO. Several years after they were founded the men decided to change the format of their event to be a dinner for men only, so they would be different from other groups.

I began working for the group about 35 years ago when it was a dinner limited to 300 men. For some reason the men thought I would do a good job if I was their Executive Director and my story with the group began. I call the committeemen “my guys”, and treat them like my brothers.

About 20 years ago the men decided to leave AMC and become an independent St. Louis organization. From that time until the present we have grown, far beyond our dreams. Since becoming a St. Louis organization we have raised more than 6 million dollars that we award to worthy cancer related causes in the metropolitan St. Louis area.

I took everything I learned from other boards I served on, professional and nonprofit, and applied that knowledge to the STLMGAC. As I have often said, if you have a good product and believe in it, you can make it work. I believed in the men’s group then and continue to believe in the work we do today.

Kim Tucci, John Ferrara, Joe Fresta and I became partners in 1990. We started a distributorship in the promotional products industry and Premiums Plus was born. We had an amazing run for 27 years, but the best part of the partnership was the incredible relationship I had with my partners.

My husband used to say Kim and I were like brother and sister, we thought so much alike. I loved being around him as did hundreds of other people, but our relationship was truly special. Kim and I respected each other, when he received an honor I was always there applauding as if it was his first award and when I was honored he returned the favor. We supported each other.

Kim became the celebrity auctioneer for the annual Men’s Dinner and received the first “Man of the Year” Award from our group. He left his mark on the men’s group and will always be remembered for helping us to raise not just more money but for raising the bar in our fund-raising efforts.

Kim sponsored me when I joined the Board of Heat up St. Louis where I have served for the last 10 years and plan on continuing in that capacity as long as they want me.This award tonight means more to me than I can express because it is named after J. Kim Tucci, my partner, my friend and yes, my brother.