From the boxcars to the Harlem Globetrotters to the heights of the business world, Mannie Jackson has had a journey through life that might be found only in fairy tales.

Born in a railroad boxcar in Illmo, Mo., Jackson spent his early childhood years with his parents and other members of his extended family living on the tracks. Years later, following a successful high school basketball career at Edwardsville, he accepted a basketball scholarship to the University of Illinois. It would be the start of an amazin 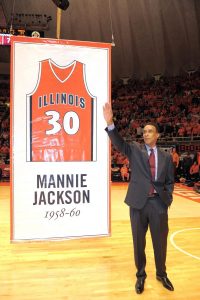 g journey that would take him to the highest levels of the business world.

At Illinois, Jackson broke down racial barriers, when he and former high school teammate Govoner Vaughn became the first African Americans to letter and start for the Illini men’s basketball team. After graduation, Jackson headed to New York City to work and play in the National Industrial Basketball League.

Jackson’s work in New York was interrupted when Globetrotter owner Abe Saperstein asked him to join the international team as a competitive player. Following his “globetrotting” basketball days, he re-entered the corporate world with a new found global prospective. In 1992, Jackson bought the financially troubled Globetrotters and turned the franchise into a fast-growing, profitable and relevant entity.

In order to help other African-Americans in the business world, Jackson later co-founded and served as the first chair for the Executive Leadership Council, an organization devoted to increasing the number of black executives in corporations worldwide.

Jackson’s legacy of giving back has extended to his alma-mater, where he donated $2 million dollars to start the Mannie L. Jackson Illinois Academic Enrichment and Leadership Program (I-LEAP), which provides academic and social support through bi-weekly, one-on-one academic coaching sessions, mentoring, academic-skills development, leadership training and referrals to resources.