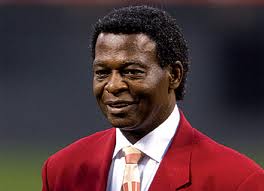 In 1964, a promising young outfielder named Lou Brock was traded from the Chicago Cubs to the St. Louis Cardinals for pitcher Ernie Broglio. The trade became known as one of the most lopsided deals in baseball history. At the time of the trade, Brock’s best season at the plate had been an ordinary .263 and he was having trouble defensively, while Broglio had won 18 games twice in his career. After the trade, Broglio would win only seven more games and retired from baseball after three years, while Brock would lead the Cardinals to two world titles and become baseball’s all-time stolen base leader.

Lou Brock was born on June 18, 1939, in El Dorado, Ark., and grew up a shy, smallish youngster who did not begin playing baseball until he was 13. He attended Union High School in Mer Rouge, La., where he led his class academically and represented the school in state math and science competitions and joined the baseball team as a left-handed pitcher. He then attended Southern University in Baton Rouge, La., majoring in math. He also played baseball, eventually switching to the outfield. He had improved so much at his new position that he began to attract the interest of several maj 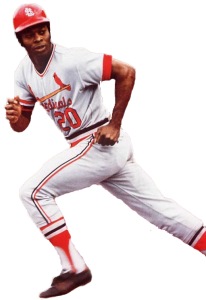 In 1961, Brock signed with the Cubs and after leading the Northern League in hits, runs, doubles, and batting average (.361), the Cubs called him up to the majors at the end of the season. Brock struggled during his couple of years in the majors, and in 1964, after a promising start, went into a 3 for 42 slump at the plate and the Cubs traded Brock to the Cardinals on June 15 and he immediately became the Redbirds’ starting left fielder. His impact on the team was dramatic.

When Brock became a Cardinal, the team was in fourth place, 6 1/2 games out of first. Brock hit .348 the rest of the season as the Cardinals passed the Phillies, Giants, and Reds to capture the pennant and led his team to a World Series victory over the Yankees.

In 1965, Brock scored 107 runs, hit .288, and stole 63 bases, beginning a string of consistently outstanding seasons. In 1966, after stealing 74 bases, he won the first of his eight base-stealing titles. Perhaps Brock’s best season was in 1967. He led the National League with 113 runs scored, had 52 steals, notched 21 home runs, and drove in 78 runs. He capped the 1967 season with a stellar performance in the World Series against the Boston Red Sox, which the Cardinals won in seven games. He led the Cardinals back to the World Series in 1968, but they were defeated by the Detroit Tigers. At the time, Brock had the highest batting average (.391) of any player to appear in two or more World Series. He had also stolen 14 bases, a World Series record.

During his stellar career, Brock stole 938 bases, captured eight stolen-base titles, scored 90 runs 10 times, and batted .300 in
eight seasons. He stole 50 or more bases for 12 consecutive years, totaled 3,023 hits with a career .293 average, and was
selected to the All-Star team six times. He was elected to the Baseball Hall of Fame in 1985.