(The following is an edited version of a story by Dave Lange for SoccerSTL.net.)

Many people have written many words about Lori Chalupny, whose stellar playing career ended last year: Trendsetter. Versatile. A leader. A game-changer. A collegiate, 2008 Olympic and 2015 World Cup champion.

Maureen McVey, who has been part of women’s soccer in St. Louis almost from day one as a player at the University of Missouri-St. Louis in the early 1980s and as one of the winningest high school coaches in girls’ soccer, may have described Chalupny best. “Lori was all business on the field.” Chalupny’s business on the field was to go hard, make plays, score goals and defend stubbornly. Her business off the field was to promote soccer, not herself. “She put St. Louis on the map as a place to recruit future U.S. Women’s National Team players,” said Lindsay Kennedy-Eversmeyer, who owns and coaches Fire & Ice, the St. Louis entry in the Women’s Premier Soccer League, and who has played and coached with Chalupny.

“The girls to follow her should be grateful for that.” Chalupny put St. Louis girls’ soccer on the map early in her career, playing her first game for the United States at the astonishingly young age of 17 while a junior at Nerinx Hall. “When I was a youth player, I didn’t need any motivation to get out there and practice,” Chalupny said. “

As I got older, I had to add in some of the ‘not-so-fun’ aspects of soccer, like lifting weights and running fitness. That is where a lot of separation happens between players because not everyone is willing to do what it takes to be fit and strong. “I just wanted to be the best player I could be.” 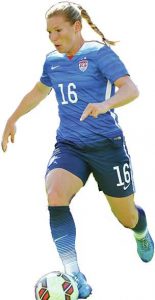 That approach carried Chalupny to greatness. At North Carolina, she was a three-time All-American, the team captain, a career 30-goal scorer and a member of an undefeated national champion. Anson Dorrance, the only coach in the history of a program that has won 22 national titles and produced players such as Mia Hamm, recently said Chalupny is one of his all-time top three players — and he doesn’t rank numbers one through three.

For the United States, she helped win the U-19 World Cup in 2002, was named U.S. Soccer’s Young Female Athlete of the Year in 2005, never came off the field as the U.S. finished third in the 2007 World Cup, and was a key member of the 2008 Olympic champions. Steve Goff of the Washington Post called Chalupny “the most complete and versatile player” on the U.S. team in 2010.

It was in that same year that U.S. Soccer banned Chalupny from the team because of lingering issues from concussions. Nevertheless, she was medically cleared to play professionally, continuing to excel in the old Women’s Professional Soccer and the current National Women’s Soccer League, serving as team captain with the WPS St. Louis Athletica and the NWSL’s Chicago Red Stars. Rory Dames, her coach in Chicago, called Chalupny one of the best five players in a league replete with talent from the U.S. and other national teams.

With Coach Jill Ellis’ support, Chalupny rejoined the U.S. National Team in December 2014 and made the World Cup roster. Chalupny ended her career against Brazil last October having played 106 games for the United States, at the time the most by any man or woman from St. Louis. Current U.S. National Teamer Becky Sauerbrunn surpassed Chalupny’s total earlier this year.

“It’s difficult to wrap my mind around what my legacy is because my career just ended,” Chalupny said. “St. Louis has such a rich tradition of soccer on the men’s side of the game. It isn’t hard to name men’s players from St. Louis who have had an impact on soccer, both nationally and globally. Now, with two local Women’s World Cup winners, I think St. Louis is on the map with the women’s game as well. I hope Becky and I have inspired youth players in St. Louis to believe in their dreams.”