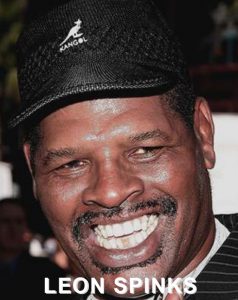 Leon Spinks is noted for achieving what has been regarded as one of the biggest upsets in boxing history. Spinks, then ranked among the top heavyweight challengers, astounded the boxing world on February 15, 1978, beat Muhammad Ali for the heavyweight title in a 15-round decision in Las Vegas. It was only the eighth pro fight for the St. Louis native, the fastest ascent in history. An aging Ali had expected an easy fight, but he was out-hustled by Spinks. It was one of the few occasions when Ali left with a bruised and puffy face.

Spinks finished with an overall record of 26 wins, 17 losses and 3 draws as a professional, with 14 knockout wins. He had won the gold medal in the light heavyweight division during the 1976 Summer Olympics in Montreal, alongside brother Michael, who also won a gold medal in those games.Two years earlier, at the inaugural 1974 World Amateur Boxing Championships in Havana, Cuba, he captured the bronze medal. He collected the silver the following year at the Pan-American Games, then won the light heavyweight gold medal at the 1976 Summer Olympics in Montreal, Canada.

After his professional boxing career, Leon competed in several boxer vs. wrestler matches in New Japan Pro Wrestling in the 1980s. He later worked for Frontier Martial-Arts Wrestling, winning its world title in 1992. In the late 1990s, Spinks was a headliner on year-round, touring autograph shows.

As a youngster growing up in St. Louis, Leon had several health issues. He weighed less than four pounds at birth, and at 2 weeks old, he developed yellow jaundice and almost died. He dealt with low blood pressure and periodic fainting spells, hardly a prescription for survival in the crime-infested area of St. Louis, where he resided. Along with his brother, Michael, Leon was a frequent target of neighborhood gangs. “Sometimes I’d fight back,” he later recalled. “But when we were younger, there were always too many guys fighting us at one time.”

Leon, along with his six brothers and sisters, were raised by their mom, Kay, a tough, God-fearing woman who survived off welfare assistance and read the Bible to her children for hours after supper every day. Spinks made it to the 10th grade before dropping out of school and joining the Marine Corps. For the undisciplined youngster, adjusting to military code was a tough transition. He frequently fought with his drill sergeants and his boot camp experience lasted an unprecedented six months.

Eventually, Spinks made peace with his new life, got out of boot camp and joined the All-Marine boxing team. By 1976, he was arguably the best amateur boxer in the world, winning all but seven of his fights and registering 133 knockouts over a three-year period.