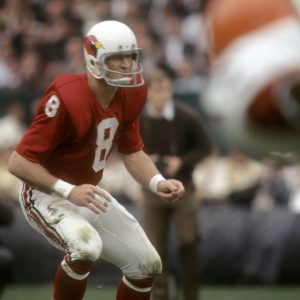 He was the bane of every quarterback’s existence, the player most likely to deliver physical and mental pain. His 6-0, 190-pound body was a cleverly disguised wrecking machine. Whether dashing madly into an opposing backfield – he was the pioneer of the safety blitz – or aggressively defending against the pass, Larry Wilson spent 13 seasons spreading his special kind of fear around the National Football League.

It was a fear born out of respect for the oft described “toughest player in the game.” Wilson was a football bulldog, a free safety for the St. Louis football Cardinals who played through incredible pain and never conceded a down. Former New York Giants coach Allie Sherman called Wilson “the goingest player I ever saw.” Others called him the NFL player who coaxed more out of his abilities than any other.

Wilson’s reckless style inspired Cardinals defensive coordinator Chuck Drulis to develop the safety blitz — code name “Wildcat.” From 1960 to 1972, the former University of Utah halfback shot the gaps of offensive lines, making life miserable for quarterbacks and setting himself up for nasty blows from much-bigger blocking backs. When Wilson stayed back in coverage, he was a different kind of Wildcat — a great open-field tackler and an instinctive pass defender with an uncanny knack for getting to the ball.

Despite his skill and adaptability, Wilson was not drafted until the seventh round of the 1960 NFL Draft by the Cardinals. After originally playing as a cornerback, Wilson switched to free safety, and it was there that he became a fixture. Over his Hall of Fame career, Wilson, an eight-time Pro Bowl selection, intercepted 52 passes, including a league-leading 10 in 1966. But it was one he made in 1965 that brought him everlasting fame. Playing with casts on both of his broken hands, he leaped high to block a pass by Pittsburgh Steelers quarterback Bill Nelsen. Wilson then cradled the deflection in his arms and ran the ball back 35 yards, setting up a touchdown. The play was vintage Larry Wilson — grit and determination. Overall, he ran those 52 career interceptions back for 800 yards and five touchdowns.

Jerry Kramer, a guard for the Green Bay Packers and author of Instant Replay, called Wilson “the finest football player in the NFL.” Kramer described Wilson’s play during an Oct. 30, 1967 game, “…he fired up their whole team … his enthusiasm was infectious.”

Wilson also served as the Cardinals’ interim head coach in 1979 after the dismissal of Bud Wilkinson.

Wilson was inducted into the Pro Football Hall of Fame in 1978. In 1999, he was ranked number 43 on The Sporting News’ list of the 100 Greatest Football Players, making him the highest-ranked player to have played a majority of his career with the Cardinals’ franchise. The team also retired his uniform No. 8. He was ranked No. 9 on the NFL Network’s list of the “Top 10 Draft Steals” in the history of the NFL.