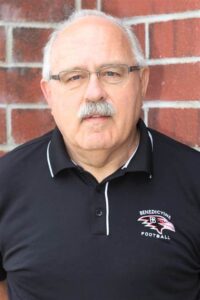 Larry graduated from Benedictine College In 1972 where he played football, golf, rugby and bowled for the college. He was captain of the football team and MVP In 1972 as a defensive lineman. After graduation he remained at Benedictine as an assistant football coach for John Barlcevlc, coaching the offensive and defensive linemen. He spent 6 seasons as an as 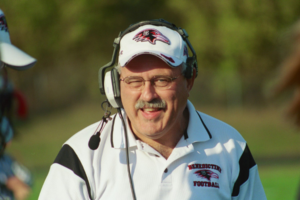 In 1974 at the age of 24 he assumed the position of Head baseball coach for five seasons, playing a strong NCAA Division II schedule as well as Division I institutions such as KU, KState, Iowa State, Tulsa and Creighton University.

Larry was offered the position of Head football coach by Benedictine College In 1979. At 28, he would be the youngest head college coach In the country. He would hold that position at Benedictine for the next 42 years. He would finish his career with 304 wins, which ranks him 13th All Time, among all that have coached at the college level. He would finish with the 2nd most wins at the NAIA level. He would be one of two coaches to accomplish over 300 wins that at the same Institution. During his tenure, the Ravens would:

He is proud of having had the opportunity to work with so many great coaches, and to be a part of the academic and athletic experiences of thousands of great young men. Larry also served as Benedictine’s Director of Athletics for 24 years.

*He was selected as the Kansas College’s Athletic Administrator of the Year.
*In 2018 Inducted Into the National Association of Intercollegiate Athletics Football Hall of Fame and the Raven Hall of Fame.
*The Ravens play at Larry Wilcox Stadium, which he was the driving force in building.
*In 2007 he was acknowledged with the St. Benedicts Abbey Kansas Monk Award.
*In 2021 he received the Kansas City Sports Commission Lifetime Achievement Award.
*February 2022 Larry and Janet WIicox receivde the college’s highest award with the Cross of the Order of St. Benedict’s.

Larry is honored to return to the area where he developed his athletic Interests, and the foundation for his career as a coach and athletic administrator; and be inducted into the St. Louis Hall of Fame.