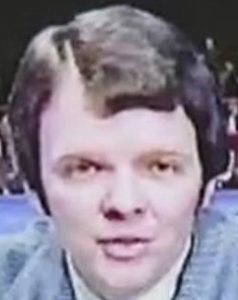 As the host of Wrestling at the Chase and ring announcer for Kiel and Arena mat programs, Larry Matysik was the decades long public face of St. Louis wrestling.

A closer examination of the operation revealed he was much more, including program author, public relations director and promoter Sam Muchnick’s right-hand man.

Already writing articles for magazines, 16-year-old Matysik wrote to Muchnick in 1963 asking for an interview and was granted one in Sam’s office at the old Claridge Hotel. Matysik was not yet old enough to drive so his parents brought him over from Belleville, IL. Sam liked what he saw and took Larry under his wing and offered him a working relationship that would last the next 19 years. Looking back, Larry’s rise in the industry seemed to almost mirror Sam’s career path under Tom Packs.

When Larry finished college, he went to work for Muchnick full time. 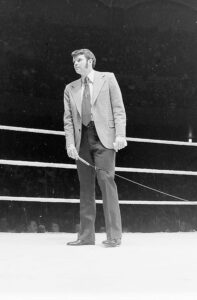 When Muchnick retired in 1982 and sold the business, Larry took on greater responsibilities for the promotion as its general manager. But over the course of the next year, he became dissatisfied with the way in which the new ownership team conducted business and resigned on February 25, 1983.

As Muchnick had done over 40 years earlier, Larry set out to make his own mark as a promoter. On June 18, 1983, he held the first program under the auspices of his new company — Greater St. Louis Wrestling Enterprises. Though the powers that be did their best to block his access to the established stars of the day, Matysik had developed connections and relationships to the point where he was able to stage an 8-bout bill that featured the likes of “King Kong” Brody, Bob Sweetan, Tully Blanchard, Spike Huber, Angelo & Lanny Poffo and Randy Savage.

When the territories began to fall under the onrush of the national expansion, Larry’s promotion, along with many older, larger, and more established organizations, collapsed as the last vestiges of the original National Wrestling Alliance were wiped away.

In Matysik, Muchnick had found a man who understood what he was trying to accomplish and who helped him make the dream flourish as the torch of St. Louis professional wrestling was passed from Sam Muchnick to Larry to keep the flame alive.

Because of his dedication and passion for St. Louis wrestling that flame remains alive today.