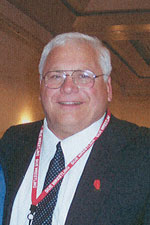 When you talk about amateur wrestling in the St. Louis area, the conversation always gets around to Larry Kristoff. Sometimes it starts with him. Kristoff, 79, has done it all in a decorated wrestling career that makes him one of the most influential wrestlers in U.S. history. FloWrestling, for example, ranked the Carbondale, Illinois native at No. 64 in the Top 100 American Wrestlers of all time. He’s also a member of the National Wrestling Hall of Fame.

That’s saying plenty, but Kristoff has plenty of accolades to back his lofty status and high regard among U.S. wrestlers and fans of the sport. Get this:

For all his accomplishments on the wrestling mats, including an overall record of 313-13, Kristoff was equally successful when he dived into coaching. All you need to do is check the record books at Southern Illinois University Edwardsville. Kristoff built the program from the ground up and then developed it into a monster among D2 schools nationally. From where it started to where it went could have been Kristoff’s greatest achievement. SIUE had no athletic facilities for wrestling, no scholarships and not much of a budget. Practices were held in Peck Hall and Morris University Center and home meets were held in the Meridian Ballroom in the University Center.

Nevertheless, Kristoff and the Cougars persevered and by 1973, SIUE began to award wrestling scholarships. The program was on the fast track to glory. The Cougars regularly competed for national championships and registered consecutive D-2 titles in 1984, 1985 and 1986. SIUE finished in the Top 10 nationally no fewer than 18 times during his 30-year tenure (starting in 1969) directing the Cougars.

Their 1986 championship – the third in three years – was especially gratifying for Kristoff. “Winning at home is the biggest thrill going because we get to do it before family and friends,” Kristoff said. “It means more than the last two together. This gives me chills, up and down.”

With Kristoff guiding SIUE, the Cougars produced 111 D-2 All-Americans, including 18 national champions and 11 D-1 All America matmen. Sons Mark and Kip Kristoff both won national championships and were four-time All-Americans. They were inducted into the SIUE Hall of Fame in 2015. The Kristoff brothers also combined for four Illinois High School Association titles. Dad also coached U.S. teams on the international level many times, including serving as head coach of the 1975 and 1976 World Cup teams. In addition, he was a member of the U.S. World team staff numerous times.