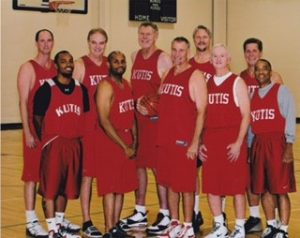 The NABA was the sister organization of the AAU and sanctioned by the ABAUSA. The Kutis ’76 team traveled to Minneapolis where it won three games by a total of 6 points. Center Rich Niemann (SLU), was voted MVP and guard Gary Sparks (WU) made the all tourney team. The “Undertakers,” as they were dubbed by the local press, shocked the local Pillsbury Kings in the semifinals. In 1981, St. Louis sponsored the national event at Meramec C.C. and was once gain victorious. Rich and Vince DeGreff were named to the all-tourney team.

Having made their mark, Kutis has remained atop amateur basketball in St. Louis for decades. Scrimmaging local colleges, league play at Wohl Center, Tandy, Maryville, Webster and the Salvational Army Carondelet Citadel, is where Kutis has won the league title in five different decades.

“We would like to thank Kutis Funeral Homes and the Tom Kutis family for their unwavering support since 1975,” said Jim Buford, who has been a player and coach for the teams. “To date, the 1976 championship trophy is still the largest award displayed in the trophy cases at their three funeral homes. “We would like to thank the St. Louis Sports Hall of Fame for honoring us with their Award of Champions. Honoring a bunch of basketball ‘junkies’ who just want to play and win, is special to us.”