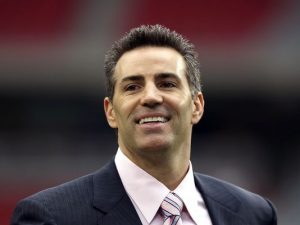 The moment was both wrenching and unforgettable. San Diego safety Rodney Harrison crashing into quarterback Trent Green’s knee. Green tumbling to the turf of what was then called the Trans World Dome. Doctors and trainers scurrying out on the field. Isaac Bruce angrily slamming his helmet to the ground. Green was done for the year.This franchise seemed cursed. Team president Jay Zygmunt was ashen-faced. I turned to one of my colleagues in he press box  and said, ”This team will be lucky to win four games.” (Not one of my better predictions.)

But what would the ’99 Rams do at quarterback without Green, the local kid from Vianney High School? With the regu­ lar-season looming, there wasn’t much time to ponder options. The very next day, somewhat to everyone’s surprise, coach Dick Vermeil sat behind a table in the media room at Rams Park and uttered these now-famous words: ‘We will rally behind Kurt Warner.”Yes, he said Kurt Warner. Kurt Warner? Yes, the same Kurt Warner whose career stats after his rookie season of 1998 read as follows: 11 attempts, four completions, 39 yards. 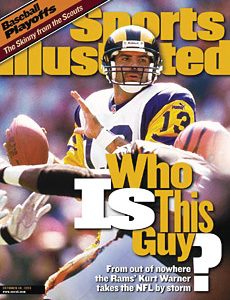 Warner had played a regular­ season game in the TWA Dome before – for the Iowa Barnstorm­ers of the Arena Football League. He had played his college football at the 1-AA level Northern Iowa, and had a brief training camp stint with the Green Bay Packers in 1994. It  took him four years to get anoth­er shot at the NFL, and in-between the ’94 experience in Green Bay and the ’98 camp with the Rams, Warner spent three sea­sons with the Barnstormers and the spring of ’98 with the Amsterdam Admirals of NFL Europe. Not exactly the express lane to NFL stardom.

In the middle of that ’98 season in St. Louis, I remember Rams general man­ager Charley Armey telling me that Warner was the best quar­terback on the roster. How could you tell based just on practice? And then strangely, early in the offseason following an awful 4-12 cam­paign in ’98, the Rams put him on the expansion list for the reborn Cleveland Browns. What would’ve become of Warner had the Browns selected him? What would’ve become of the Browns?

Warner wasn’t claimed. He stayed in St. Louis, and now, in late August  ’99, the humble yet engaging native of Burlington, Iowa, would be a starting NFL quarterback. Vermeil obviously saw something in the kid. And Armey was right after all.

We all know what happened next. Beginning with the season opener against Baltimore and ending with the Super Bowl XXXIV triumph against Tennessee, Warner took the city and the NFL by storm. As the completions mounted, and the scoreboard rang up points like a pinball machine, a legend was born. The Greatest Show on Turf. There was the mad genius of an offensive coordinator – aptly nicknamed “Mad Mike” Martz – concocting aggressive, pedal-to-the-metal  game plans. There was Isaac Bruce and rookie Torry Holt beginning their union as one of the best wide receiver tandems in NFL history. The best all-purpose running back in NFL history- no arguments here – Marshall Faulk, became only the second player in league annals to reach 1,000 yards receiving and 1,000 yards rushing in the same season. 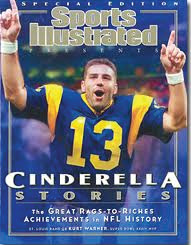 essful “Show” needs a supporting cast, and the Rams had that in the electric Az-Zahir Hakim and the seasoned Ricky Proehl at wide receiver. With Ernie Conwell working his way back from a career-threatening  knee injury, Roland Williams proved to be a resourceful tight end. Orlando Pace was the anchor on an offensive line filled with less-heralded, but highly effective, grunts.

The defense was grossly underrated, featuring 1999 NFL sack champion Kevin Carter and a sawed-off tackling machine at middle linebacker in 5-foot-10 London Fletcher. Another linebacker Mike Jones, made the tackle heard round the world – at least the football world – by stopping Kevin Dyson at the one-yard line to preserve a 23-16 Super Bowl victory over the Titans.

Warner was the maestro on offense, distributing the ball everywhere. It didn’t matter how much money you made, where you were drafted, how many Pro Bowls you had attended. If you were open, you better have your head turned for the ball, because Warner would throw it your way. That was one of the strengths of those Greatest Show teams. There were just too many options in the passing game. You couldn’t cover them all. And nobody really did in that magical ’99 season.

Warner didn’t throw the prettiest ball. It frequently had a little wobble to it. But he could throw it deep, short, and in­ between. He could throw with accuracy. He had great field vision, and boy, could the guy take a hit. He was fearless in the pocket.

Nobody at that time threw the ball like the Greatest Show Rams. They were called a “finesse” team. Truth be told, they were revolutionary- a decade ahead of their time. The NFL has become a passing league, with just about everyone mimicking to a degree what the Rams did at the turn of the millennium. For three consecutive seasons, Warner and the Greatest Show topped 500 points, something no one in NFL history had done previously. They won it all in ’99, secured a wild-card berth in 2000, and were Super Bowl runners-up in ’01.

Warner was slowed by injury in 2002, gave way to Marc Bulger in ’03, and was unceremoniously released in the summer of ’04. He seemed lost in the wilderness for a while with the New York Giants and early in his tenure with Bill Bidwill’s Arizona Cardinals. But it turned out one miracle wasn’t enough for Warner.

After taking the woebegone Rams from the NFL’s worst team of the ’90s to the Lombardi Trophy, he nearly did the same thing with the Big Red in 2008 in a cliff-hanger of a Super Bowl XLIII loss to Pittsburgh. Improbable stuff for the former Hy-Vee grocery clerk. It’s the kind of story line they make movies about. In Warner’s case, plans actually are underway to make a movie on his life. Hopefully, it will include a brief scene on today’s induction into the St. Louis Sports Hall of Fame.

Kurt was inducted into the Pro Football Hall of Fame on August 5, 2017. Congratulations  Kurt!