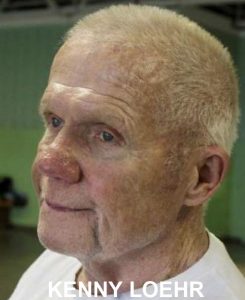 Loehr, a Mehlville resident who passed away this past February, was one of five brothers who grew up in North St. Louis near Sherman Park. He joined the Marine Corp in 1950 and was wounded in Korea.

In 1955 Loehr began training boxers around St. Louis area gyms, most recently at the 12th and Park Recreation Center. He was cantankerous, but also compassionate with his boxers. In the amateur ranks, Loehr was the U.S. coach for the World Games, the Goodwill Games and the Pan American Games. He was inducted into the USA Boxing Hall of Fame in 2005 and the Golden Gloves Hall of Fame in 1988. “The only thing I didn’t make was coach of  he Olympic Boxing Team, and I should have made that, but I wasn’t the type; I wasn’t kissing nobody’s butt,” Loehr said in a 2012 St. Louis Post-Dispatch article.

Loehr’s toughness was crafted while attending Holy Ghost Grade School. He grew tired of being bullied and learned to take care of himself in the boxing gym. He fought his first fight at age 13. He boxed in the amateur ranks for six years. In 1948, Loehr won the regional Golden Gloves championship at 126 pounds.

Under Loehr’s coaching tutelage, the Spinks brothers, who grew up in the projects in St. Louis, rose to prominence at the 1976 Olympic Games in Montreal. Leon and Michael Spinks both went on to become the heavyweight champions of the world. Each had noteworthy championship fights.

In 1978, Leon Spinks wrested the title from Muhammed Ali in one of the biggest upsets in boxing history.  Michael Spinks beat heavyweight champ Larry Holmes twice before being knocked out by Mike Tyson in 91 seconds in 1988.

Loehr also coached St. Louisan Harold Petty, a five-time Golden Gloves champion, a national AAU champ and a two-time world champion as a professional bantamweight. Petty amassed a 37-9 record and became Loehr’s assistant after retiring in 1979. Petty took over the reins of the 12th and Park gym as Loehr dealt with health issues. In a 2015 Post-Dispatch article, Petty said Loehr was a coach and father figure to him. “He taught me how to box, taught me how to respect, how to win,” Petty told Post-Dispatch writer Dan O’Neill. “He taught me so many things about life, and he taught me the most important thing — how to give back. They don’t come any better.”