During the Cardinals’ glory years in the early 1980s, there was one player who could have been called Mr. Consistency. In his eight years with the Redbirds, Ken Oberkfell never hit below .289 or above .303 while mostly playing third base (in 1979, he was the Cardinals’ regular second baseman).

Born in Highland, Illinois, and a Collinsville High School graduate, Kenneth Ray Oberkfell went on to play for six different MLB teams in his 16-year career. Oberkfell was chosen a Junior College All-American shortstop at Belleville (Ill.) Area JC and signed with the Cardinals in May 1975. 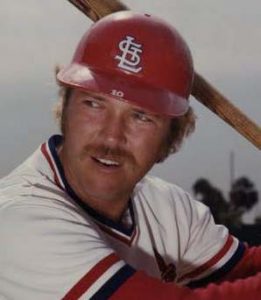 After a rough MLB start while platooning with Mike Tyson at second base, Obie became a regular in 1980. In 1982 he led the NL third basemen in fielding and helped the Cardinals win the NL East Crown. In the playoffs he had three singles, and 2 RBI, including the game-winner in Game, as the Cardinals swept the Atlanta Braves. Oberkfell played a big role in the Cardinals seven game World Series win over Milwaukee, hitting a solid .292, with 7 hits, scoring 4 runs and driving in 2 runs. By then, the Cardinals had one of the best fielding infields in the majors with Oberkfell at third, Ozzie Smith at short, Tom Herr at second and Keith Hernandez at first.

In June of 1984 Ken Oberkfell was traded to the Braves. Playing with Atlanta and later Pittsburgh he continued to field well and hit respectably. In 1989 with San Francisco he played three infield positions, led the majors with 18 pinch hits, and played in the Earthquake World Series.

After retiring as a player, Oberkfell served as a baseball coach, primarily in the minors, but he spent the part of the 2008 as the New York Mets first base coach and spent the 2011 season as the Mets bench coach. More recently, he helped coach the Gateway Grizzlies.