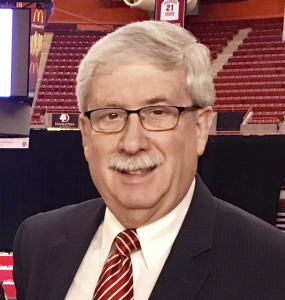 A southwestern Illinois resident of Columbia for 42 years, Keith Pickett was a co-founder and – for a quarter-century (1981-2006) – the executive director of the St. Louis Shootout high school basketball event.   The one-day extravaganza on a Thursday in early December became a highlight of the winter sports calendar in St. Louis, annually drawing national media such as ESPN-TV and USA TODAY to the Gateway City.

Regarded for years as the “premier event of its kind” in the country, The Shootout had the atmosphere of a major-college basketball event.  It provided Midwest fans the opportunity to see extraordinary high school teams and players who would go on to stardom in the college and National Basketball Association ranks.  More than 274,000 spectators attended the event over the years.

Known as the “7UP Shootout” in its early years, the event began in December 1981 at old Kiel Auditorium in downtown St. Louis as a triple-header featuring local Missouri and Illinois high schools.  At the time, Pickett was a corporate executive at the Seven-Up Company world headquarters in St. Louis.  His vision to add prep powers from other parts of the nation – starting in 1984 with DeMatha Catholic High of Hyattsville, Md. and All-American Danny Ferry – gave the one-day event a new dimension, setting a trend for hundreds of similar events that sprang up across the country.

Three seasons later (1987) Keith took personal ownership of The Shootout, keeping it alive after Seven-Up was sold by parent company Philip Morris Inc. and dismantled in St. Louis.  With the help of title sponsors KMOX Radio and Central States Coca-Cola Bottling Co., the event flourished for years as the “Coca-Cola/KMOX Shootout.”  It became such a tradition locally that many Missouri and Illinois schools that played during the day brought hundreds of students on school buses as a “field trip.”

Overall, boys’ prep basketball teams from 29 states were in the prestigious event, which expanded to as many as eight or nine back-to-back games.  Beginning in 1992, at least one girls’ game was part of the annual line-up.  The Shootout moved to the St. Louis Arena while Kiel Auditorium was being replaced, then returned downtown to the brand-new 21,000-seat Kiel Center (Savvis Center/Scottrade Center), attracting over 15,000 fans in 1994 and ’95.   Seventy-four participating schools – 21 from Missouri and 18 from Illinois – went on to capture their state championship at season’s end.  Ten of those schools were declared mythical national champion or runner-up.

In 1976 Keith and wife, Maggie, had re-located from Kansas City to metro St. Louis, where he spent the next four decades as a public relations/communications executive with Seven-Up, Contel, Mallinckrodt, Pickett & Associates and Schnucks.

Growing up as a youngster in small-town Council Grove, Kan., Pickett had been a devotee of Kansas State Wildcats’ basketball in the days of iconic Hall of Fame Coach Tex Winter, first-team All-American Bob Boozer and numerous Big Eight Conference championship teams.  The rich hoops heritage of his future alma mater stayed with him, reflected years later in the development and longevity of the St. Louis Shootout.