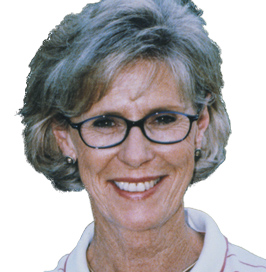 A member of the World Golf Hall of Fame, Judy Torluemke Rankin joined the LPGA Tour in 1962 at age 17 and won 28 professional events – 26 on the LPGA tour. She has been a lead analyst for the LPGA Tour telecasts on The Golf Channel and has worked select PGA Tour events as an on-course reporter.

A golf prodigy, Judy won the Missouri Amateur tournament at age 14 in 1959. The following year, she was the low amateur at the U.S. Women’s Open and in 1961 Judy made the cover of Sports Illustrated magazine at age16. She turned pro a 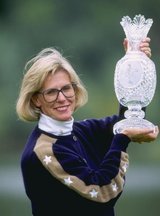 Judy was an outstanding golfer, topping the LPGA money list in 1976 and 1977 and finishing in the top 10 on the money list 11 times between 1965 and 1979. She finished second at the 1976 LPGA Championship and tied for second place at the 1972 Titleholders Championship, 1972 U.S. Women’s Open and 1977 LPGA title. Rankin won the Colgate Dinah Shore Winner’s Circle (currently known as the Kraft Nabisco) in 1976 and the Peter Jackson Classic (later renamed the duMaurier) in 1977.

Rankin earned LPGA Player of the Year honors twice and won the Vare Trophy for recording the lowest scoring average three times. Chronic back problems forced her to retire from full-time competition at the age of 38. She captained the victorious American teams in the prestigious1996 and 1998 Solheim Cup events. Rankin became the first player voted into the LPGA Tour Hall of Fame in 2000 in the Veterans category. That same year, she was inducted into the World Golf Hall of Fame.

In 2002, Judy earned the Bob Jones Award, the highest honor given by the United States Golf Association in recognition for distinguished sportsmanship in golf. She won the Susan B. Komen Award in 2007 and in 2010 captured the Old Tom Morris Award, given by the Golf Course Superintendents Association of America. That award is presented to an individual who “through a continuing lifetime commitment to the game has helped to mold the welfare of the game in a manner and style exemplified by Old Tom Morris.” Morris was a greens keeper and pro at the legendary St. Andrews Golf Club in Scotland.

Rankin has also worked as a golf commentator for ESPN/ABC Sports and the Golf Channel, and has been a professional advisor for Golf Digest and Golf for Women national magazines.