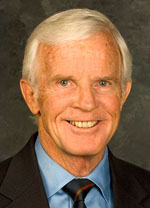 When John Schael accepted the position as the Director of Athletics at Washington University in St. Louis in 1978, he inherited a program that had terminated men’s basketball, didn’t have women’s basketball, and other sports that were limping along at the NCAA Division III level. The University Administration showed minimal interest in sports, as did the majority of students and all of the media. However, they would find out Schael would not be deterred from building a first rate program.

When Schael walked out the door on June 30, 2014, he did it with a smile having taken his Battling Bear athletic program from rags to riches! The achievements are many. How about 182 NCAA appearances, 169 University Athletic Association titles and 19 NCAA Division III National Championships?

It is Schael’s wise decisions that helped transformed the Battling Bears into a national sports power that has become a fantastic source of promotion for the academic side to prospective students. He directed the Department to eight consecutive top-five finishes in the Learfield Sports Directors Cup Division III standings, which rates athletic programs from around the country.

Starting back with his resurrection of the men’s basketball program, it is the best example of going from nothing to national champions! The program began again in 1981 after 10 years off, and in 1984 the Lopata Classic was born bringing in national powers with the same reputation for academic expertise as the Bears. The men’s basketball team has since won two NCAA Division III National Championships, back-to-back in 2008 and 2009.

Then there is volleyball. After winning the first National Championship in 1989, the Bears dominated the NCAA Tournament for six-straight seasons, winning the National title each season (1991-1996). In all, the Bears hold the NCAA Division III record for most NCAA titles with 10.

While budgets increased over the years, as the importance of athletics for the well-rounded student was now understood, more funding was needed. Schael initiated a new club for alumni, the “W Club” in 1989, and today it’s Board of distinguished, athletic alumni raises many thousands each year to support team needs in every sport. Finally, Schael gave Washington University a national image by serving on important committees … the NCAA Classification Committee, the NCAA Division III Council, the NCAA Postgraduate Scholarship Committee and President of the National Association of Division III Athletic Administrators, which he helped to found.