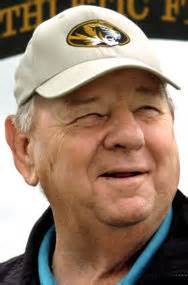 For almost five decades John Kadlec was a fixture for the University of Missouri’s football team – on and off the field. He was a player, assistant coach, a fundraiser and a color analyst. A native of St. Louis, Kadlec was an all-conference lineman in 1950. He then served as an assistant football coach under Don Faurot, Frank Broyles, Dan Devine and Al Onofrio, and worked as a Tiger administrator since 1986. He also served two tour of duties at Kansas State — as an assistant football coach under Doug Weaver and as the Wildcats’ chief fundraiser. He most recently served as a color analyst on the Tiger Radio Network.

Kadlec, affectionately was known as “Mr. Mizzou”. He said he was ready to retire from the broadcast booth following Mizzou’s 2009 season. Mizzou Director of Athletics Mike Alden, however, asked him to reconsider and stay on for another year. Not surprisingly, Kadlec obliged.

Kadlec began his collegiate playing career at St. Louis University. When Coach Dukes Duford left SLU, however, so did Kadlec. Based on Duford’s recommendation, Tigers coach Don Faurot visited the Kadlec household, but young John told his parents he didn’t want to go away to college. His parents persisted. “That’s when you find out your parents are smart,” Kadlec said. “If it wasn’t for Coach Faurot, I wouldn’t be sitting here. My folks were middle class folks. Heck, they didn’t know what college was. I’ve had a lot of breaks in my life.

Kadlec was reluctant to go to Mizzou, but he showed up in Columbia in the summer of 1947 without having ever visited the campus. He went on to become an All-Big Seven offensive lineman. Except for the six-year stint at K-State, Kadlec had been in Columbia ever since. After his playing career ended, Faurot called with an offer to be the offensive line coach for the freshman team. “I couldn’t believe it,” Kadlec said. “I told coach Faurot that I loved coaching. He asked if I wanted to stay on. I moved up to varsity. And coaching became my life.

Kadlec went on to serve as an offensive line coach under several head coaches, including Dan Devine. In 1960, Mizzou was ranked No. 1 in the nation and went on to defeat Navy in the Orange Bowl. His coaching career ended in 1977.

In 1995, Kadlec became the Tiger Radio Networks color analyst — a position he reluctantly accepted as a favor to former Athletics Director Joe Castiglione. Nine bowl games and two coaches later, he retired from the booth in 2011. Kadlec remained a part-time special assistant to Alden with an office in Mizzou Arena until his death 2014.

“Anything I have accomplished has been the result of the University of Missouri”, Kadlec said.