If you were a basketball aficionado around the St. Louis area in the mid ’60s and early ’70s, the name Joe Wiley had a familiar ring.

An All-State and All-America high school performer, Wiley is considered possibly the finest basketball player from 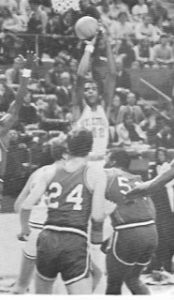 Belleville, where he averaged 23 points, 13 rebounds a game for the Maroons. During his senior year, the 6-foot-5 jump-shooting forward sparked the Maroons to a 27-5 record and a third-place finish in the Illinois state tournament. Along the way, Wiley broke the state tournament scoring record with an average of 32 points per game.

After high school, Wiley went on to greater fame at St. Louis University where he was an All-Missouri Valley Conference choice for three seasons. He ended his career at SLU as the third all-time scorer and fourth in rebounds. His senior year he tied for the Missouri Valley Conference scoring lead with a 22-point average. He was named the Billikens’ most valuable player in both his junior and senior seasons. His single-game highs for the Bills included 35 points against Southern Illinois University-Carbondale and 33 against Cincinnati and Memphis State in 1970.

He is a member of the St. Louis University Hall of Fame and All-Century teams and has also served as an analyst on St. Louis U.’s television broadcasts.

But Wiley is just as proud of his post-playing days. After college, Joe remained in the St. Louis area, working for Pfizer, General Dynamics and Monsanto. Then, in 2003, after a 30-year career in human resources, Wiley formed Quest Management Consultants, a human resources consulting firm with expertise in career transition, leadership development, organizational effectiveness and talent acquisition.