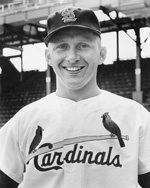 To say that Joe Cunningham had a colorful baseball career would be an understatement. The performer known as “Jersey Joe” because he was born in Paterson, N.J., had the honor of being unseated from his normal first base position with the St. Louis Cardinals when Stan Musial moved there from the outfield. Joe then moved to the outfield like a duck takes to … well … let’s say he made the routine look adventurous.

Joseph Robert Cunningham Jr. was born August 27, 1931, and grew up in Lodi. After starring for the Lodi High School Rams, he signed a contract at age 17 with the St. Louis Cardinals and spent the summer of 1949 with Johnson City of the Appalachian League. Joe used his smooth left-handed swing to lead the team with a .361 average. After a couple more minor-league stops and a stint in the military, Joe reached the big leagues in 1954 with the Cardinals and made headlines by hitting three homers in his first two games, including a pair off Warren Spahn.

He batted .284 in limited action, and then spent most of the next two years at Triple-A. Finally, in 1957, Joe earned a full-time job in St. Louis. He turned in his first of three straight .300 seasons. In 1959, Joe had a career year, batting .345 and leading the NL with a .453 onbase average and was named an All-Star for the first and only time in his career. As mentioned, Joe’s natural position was first base, he played most of his games in the outfield for the Cardinals, as they were moving superstar Stan Musial to first.

The Cardinals traded Joe straight-up for Minnie Minoso after the 1961 season. Playing regularly at first for the first time, Joe logged a career-high 526 at bats in 1962 and topped 100 walks.

After breaking his collarbone in a 1963 collision at first base, Joe was basically a platoon player for the remainder of his career. He played out the string with the Washington Senators, retiring after the club released him early in 1966.

Joe finished with a .291 career average and reached base at a .403 clip. Joe returned to the Cardinals and worked as coach, manager and executive with the team over the next two decades. He was a coach on Whitey Herzog’s staff when the Cards won the 1982 World Series.

He again found fame later with the Cardinals, directing the Cardinals “Doing It Right” program. More than a quarter of a million youngsters in grades K-6 have participated in the program over the years. During the events, staged at the elementary schools, students are reminded not to do drugs, to stay in school, to participate in sports, and to stay fit!