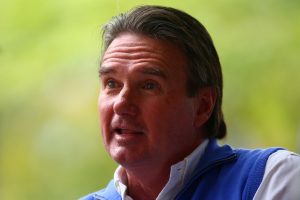 A  marvel of longevity and self-motivation, Jimmy (Jimbo) Connors was a fiery shot-making lefty with a two-fisted backhand that pounded foes for more than two professional decades. His rip-roaring baseline style made him look like a rag-doll, throwing himself into his “groundies” with utter gusto.

Born in East St. Louis, Ill., and raised in Belleville, Connors worked his way up to become the world’s No. 1-ranked player, who won eight Grand Slam singles championships and two Grand Slam doubles titles during his career. Connors went to college for a year at UCLA, where he won the NCAA singles title in 1971. He turned professional in 1972 and won his first professional title later that year at Jacksonville, Fla.

Connors simply refused to accept that he was beaten and gave absolutely everything on every point of every game. He was also not averse to playing to the crowd or abusing his opponent or the umpire; anything he could think of to give himself an edge. His brash behavior on and off court came to earn him a reputation as the brat of the tennis world. He acquired the nickname “Brash Basher of Belleville.” His high-profile romance with fellow teen tennis prodigy Chris Evert in the early years of his career also helped keep him in the headlines.

Connors also acquired a reputation as a maverick in 1972 when he refused to join the newly formed Association of Tennis Professionals (ATP), the union which was embraced by most male professional players. He avoided the mainstream of professional tennis to play in, and dominate, a series of smaller tournaments organized by Bill Riordan, his manager and a clever promoter.

In 1974, Connors and Riordan began filing lawsuits, eventually amounting to $10 million, against the ATP and its president, Arthur Ashe, for allegedly restricting Connors’ freedom in the game. It started when Connors was banned from the 1974 French Open after he had signed to play for World Team Tennis, which conflicted with ATP tournaments, and the entries of all WTT players were refused. 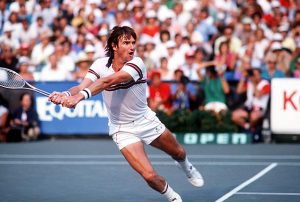 As it turned out, the French Open was the only major tournament that Connors did not win that year and his exclusion possibly prevented him from becoming the first male player since Rod Laver to win all four Grand Slam titles in one year. The French Open was the one Grand Slam title Connors would never win, although he got as far as the semifinals four times. However, in 1974, Connors won the Australian Open, Wimbledon and the U.S. Open. He won 14 tournaments that year.

Connors reached the world’s No. 1 ranking in July 1974, and held it for 159 straight weeks. Over the course of his career, he held the World No. 1 ranking for 263 weeks. In 1976, Connors met Swedish star Bjorn Borg in the final of the U.S. Open and saved four set points in a thrilling third-set tie-breaker to beat the Swede.

Despite his success, Connors remained an independent. At Wimbledon in 1977, he refused to take part in a parade of former champions to celebrate the tournament’s centenary, and was booed when he went took the court. He still managed to make the final that year, but lost to Borg in the five-set final.

After a few down years on the tour, Connors was back in the Wimbledon final again in 1982, where he faced rising young star of the tennis world, John McEnroe. Connors stunned the defending-champion as he came back from being three points away from defeat in a fourth-set tie-breaker to win in five sets and claim his second Wimbledon title.

Connors also defeated another of the next generation of tennis stars, Ivan Lendl, in the U.S. Open finals in 1982 and 1983. Connors’ last Grand Slam final came at Wimbledon in 1984, where McEnroe. prevailed.