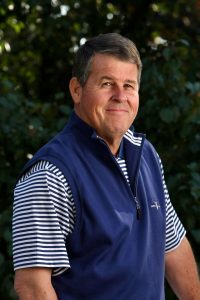 When you play golf – and play it well – it isn’t bad to have an idol to look up to like Arnold Palmer. Maybe that’s why Jim Holtgrieve, one of the top amateur golfers to come out of St. Louis, has had such a stellar career that includes a winning record as a player on three victorious USA Walker Cup teams and an individual triumph at the inaugural 1981 U.S. Mid-Amateur Championship. It was those credentials that led the United States Golf Association to name Holtgrieve the captain of the 2011 USA Walker Cup squad.

“I’m elated to be given this honor by the USGA and to have the chance to captain 10 young men from the United States of America,” said Holtgrieve, in an interview with the Missouri Golf Association. “The USGA has always been very special to me and this is something that my father always hoped I would be able to do. This would have made him very proud.” Holtgrieve was also named the captain of this year’s United States team that traveled to Royal Aberdeen Golf Club in Aberdeen, Scotland, for the 42nd Walker Cup Match. 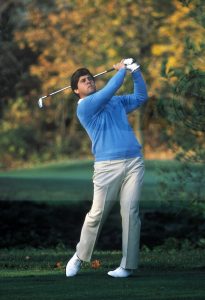 The 63-year old Holtgrieve, who was known for hitting prodigious shots off the tee with a 1 iron, was inspired by his father to play the game of golf. He was one of the country’s top amateur players during the 1970s and ’80s and earned a spot on winning Walker Cup teams in 1979, 1981 and 1983, where he had a combined record of 6-4. He also represented the USA on two victorious World Amateur Championship squads, in 1980 and 1982. As an amateur, Jim Holtgrieve is a man of distinction.

The 5-11 Holtgrieve, who went to both the University of Missouri and Washington University, also played in five Masters Tournaments as an amateur – making the cut three times. He also made the cut twice at the Memorial Tournament and also qualified for the 1978 U.S. Open.

Holtgrieve turned professional in 1998 and played on the Champions Tour from 1999 to 2005, where his top finish was a tie for second at the 1999 Home Depot Invitational. For the next several years, Holtgrieve played full-out professional golf. He made some official money, as much as $376,498 in 2001, and $1.4 million overall (before expenses). But he never won and never acquired full exempt status. In all, he played in four U.S. Senior Opens and 42 USGA championships.

In May 2005, Holtgrieve applied to get his amateur status back, and in May 2007, his reinstatement became official after he had played in 122 professional events. He also serves the USGA as a member of the U.S. Mid-Amateur Championship committee.