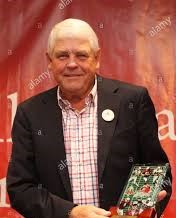 In the days before scouting combines and computers, players at mid-size schools played in anonymity, and SIU Carbondale’s star quarterback in the early ’60’s was one of them. He passed for 3,779 yards with 34 touchdowns over three seasons, but got no NFL looks as he excelled with little help behind him, winning just three games.

His former coach, Don Shroyer, then got Hart a tryout in St. Louis and he impressed them enough to get signed on in 1966. He was the sixth quarterback on the depth chart, but with a little luck and a lot of talent, he moved up to No. 2 the first year, and became the starter when veteran Charley Johnson was taken away by a military commitment.

As the starter in 1967, he impressed the fans and team quickly. He even made the cover of Sports Illustrated, promoted as one of the NFL’s young guns at QB. In game three, Hart riddled a heavily favored Detroit Lions team for 313 yards going 19 for 27, including the first of many touchdown passes, this one for 57 yards, to future Hall of Fame tight end Jackie Smith. The final score was 38-28 Big Red.

A couple of bad coaching decisions had Johnson, who returned from the military, and then a Minnesota castoff Gary Cuozzo trying to unseat Hart, but the strong-arm quarterback won out and spent 17 seasons directing the Cardinals offense. Over his 19 seasons, which ended when he retired with Washington in 1984, he completed 2,593 passes in 5,076 attempts for 34,665 yards and 209 touchdowns. He also ran for 16 touchdowns. His stats were better than Pittsburgh Hall of Famer Terry Bradshaw’s at Jim’s retirement.

The Cardinals of the early and mid-‘70’s were loaded with offensive weapons and perhaps the NFL’s best offensive line, but it was Hart’s leadership, rocket arm and clutch play that earned the nickname “Cardiac Cards” for the team. He engineered many last minute, game saving drives like the memorable Sunday in November 1975, when speedster Mel Gray made the famous “phantom catch” at the goal line on the last play to tie the arch-rival Redskins, 17-17, forcing overtime won by the Cards. That was the catalyst to winning their second Eastern Division Championship at 11-3, their best record ever. 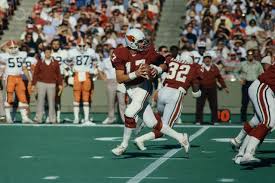 He also recalls an unbelievable comeback against the Los Angeles Rams, a heart stopping 30-28 win with the reliable Jim Bakken kicking the winning field goal at the buzzer. The Big Red had trailed 21-6 in the third quarter, and 28-20 with just five minutes left in the game! Hart kept throwing and throwing to receivers Pat Tilley and Ike Harris, piling up 324 passing yards.

Back to the beginning, Hart was an only child from Evanston, Ill. His father passed away from diabetes with Jim just 7-years old. His mother remarried and they moved to Morton Grove, Ill. He was grateful his stepfather encouraged his sports activities, which included baseball and basketball as well. Jim says his best sport was probably basketball. His Niles High School football coached encouraged him to play and made him the quarterback. Success there led him to the opportunity to stay close to home and play college football at SIU-Carbondale.

After retirement from the NFL , Hart stayed in sports first retiring to the radio broadcast booth with the Chicago Bears at in 1988, was offered and accepted the position as athletic director at his alma mater, SIU. Under his direction, the university’s sports excelled, with basketball appearing in several NCAA Tournaments.

Hart finally retired to the comforts of a Florida home, and he has been inducted into the Missouri Sports Hall of Fame.