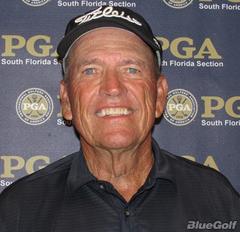 Jerry Tucker grew up in Carbondale, Illinois, playing all sports and listening to Harry Caray and Jack Buck on the radio. However, at age 14 he was smallish. In height, he was an inch under 5 feet and weighed only 88 pounds. His physique, he determined, would limit his choices in sports. That’s when he decided his best athletic alternative was to focus on golf. And focus he did.

He became the top player and captain of his high school team his junior and senior years. After four years in the Air Force, Jerry returned to Carbondale where he captained the Southern Illinois University golf team his senior year, married his sweetheart Susan and graduated with a degree in journalism.

Tucker turned pro in 1976 and worked for Steve Heckel before becoming the first assistant at Bellerive Country Club in St. Louis. Jerry qualified for the 1981 U.S. Open at Merion shortly before accepting his first head pro position at Green Hills C.C. in Mt. Vernon, Illinois. In 1987, Jerry became the head professional at Bellerive and soon became one of the top teachers and players in the St. Louis area.

His career blossomed as the host pro for the 1992 PGA Championship when he appeared on numerous radio and television shows and spoke to various civic groups and organizations. He served on several committees, edited the PGA Championship program and played in the tournament, including a practice round with his idol Arnold Palmer.

After yielding the head pro position to younger brother Mike, he moved to Florida in 1997 and pursued a long-time dream of playing the Champions Tour. Via Monday qualifiers and majors, Jerry played in 26 events, including the 2017 Senior PGA Championship, where he became the oldest qualifier ever at age 68.

In the South Florida PGA, Jerry was Teacher of the Year, six-time Senior Player of the Year and the oldest regular division Player of the Year at age 61. Overall, he competed in two U.S. Opens, two PGA Championships and 15 senior majors. He has made 13 holes- in-one and set 23 course records. Jerry also invented a short game test that is used worldwide and has coached dozens of tour players and top amateurs. He has authored two instruction books, including Symmetrical Golf in 2016.

Considered an expert on the Rules of Golf, Jerry served six years on the National PGA Rules Committee and was twice high exam scorer in USGA Advanced Rules Workshops.

Jerry and Susan have been married 42 years and live in Stuart, Florida, with their 5-year-old Yorkie named Arnie.Jerry still teaches, competes and as a huge Cardinals’ fan, watches more than 150 games a year.