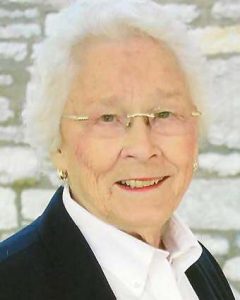 As a young teenage girl, the golf course was a place where Jayne Watson could find peace and serenity. She also appreciated the beauty of the game represented by its intricacies, order and rules. And in that arena, Watson made her imprint on the game at a national level.

Watson is an expert in golf’s slope rating system, which originated in the 1980s. The slope rating of a golf course is a measure of its difficulty for bogey golfers. Watson’s knowledge and passion for the game earned her a place on the first United States Golf Association’s Course Rating Committee. In more than three decades of volunteer service to the amateur game, Watson has rated nearly every golf course in the Missouri-Illinois region.

“Jayne has devoted an incredible amount of time and energy as an advocate for golf both nationally and in her native St. Louis community,” USGA President Diana Murphy told the St. Louis Post-Dispatch’s Dan O’Neill. “She has inspired everyone who has had the pleasure of working with her in St. Louis and on various USGA committees.”

Watson became involved in the rating aspects of golf while playing with her late husband, Andy, at Greenbriar Hills Country Club in Kirkwood. In an interview with the USGA, Watson said she told Andy she thought things within the game could be done better. In turn, Andy told Jayne “unless she was going to do something about it, don’t gripe.” She didn’t. She went to work putting in numerous hours and time in devotion to the game.

Jayne is a past president and one of six honorary lifetime members of the Missouri Women’s Golf Association. She has contributed to the St. Louis District Golf and the Metropolitan Amateur Golf associations. She’s worked numerous USGA championships and qualifiers and sits on the USGA Senior Women’s Championship Committee. “I owe golf so much,” Jayne told the Post-Dispatch. “I love doing this to pay back, to get people to recognize what it offers. You know I’ve heard Rory McIlroy say, ‘What does grow the game mean?’ And I think to myself, ‘Oh young man, if you only knew.’” USGA officials know and last February they honored Jayne with the prestigious Joe Dey Award at their annual meeting in Washington, D.C. Dey was the USGA’s executive director for more than 30 years and was the first commissioner of the PGA Tour. Said former USGA President Tom O’Toole about Watson: “Travel for the USGA, calibration seminars, championships, USGA annual meetings – she did it all.”

Administrators, organizers and players – both at the professional and amateur level – acknowledge Watson’s defining trait: a passion for the game of golf. “Passion is a theme for Jayne,” said Nancy Sebastian, former Missouri Women’s Golf Association president in a USGA interview. “She has the same passion for the rules of golf that she has for handicapping as well as course rating. She just has a passion to make the game better.” USA Walker Cup Team Captain and local amateur golfer Jim Holtgrieve is inspired by the contributions Watson has made. “Sometimes I wonder how I’m going to give back,” Holtgrieve said. “And if I can do half of what Jayne Watson has done for the game of golf, I’d be honored.