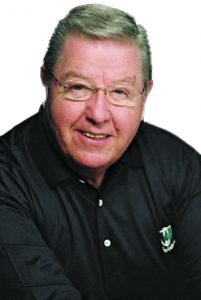 Jay Randolph has been an institution on the St. Louis airwaves for nearly half a century. Following play-by-play stints with the University of West Virginia Mountaineers in the late 1950s and the Dallas Cowboys and Southern Methodist University Mustangs in the early 1960s, Randolph moved to St. Louis in 1966 and was hired as a staff announcer for the football Cardinals on KMOX Radio.

Jay became an announcer and sports director for NBC television affiliate KSD Channel 5 (later KSDK) in 1967 and spent 21 years there. At KSDK, Randolph anchored sports coverage for the station’s newscasts and called TV play-by-play for St. Louis Cardinals baseball and was the voice of Big Eight Conference Game of the Week between 1974 and 1990. A versatile announcer, Randolph also broadcast the inaugural season of St. Louis Blues hockey in 1967-68.

Randolph served as the on-air television voice of the Cardinals for 21 seasons, split over two stints. He had a 17-year run in the Cards’ TV booth that ended after the 1987 season, when the station lost the local rights. In 2007, he returned to do the games for KSDK.

The son of U.S. Senator Jennings Randolph, Jay grew up in West Virginia and attended George Washington University. As a young man, he enjoyed considerable success as an amateur golfer and was a member of the George Washington University golf team. In 1978, he was inducted into the school’s Athletic Hall of Fame. His golf acumen would eventually serve as a springboard for him professionally when he was hired to broadcast PGA events by NBC Sports.

In fact, Randolph worked for NBC Sports in the 1970s and ’80s, announcing a wide variety of events including the National Football League, Major League Baseball, college football, college basketball, the Professional Bowlers Association, three Olympic Games and the Breeders’ Cup. This was in addition to his duties broadcasting PGA and LPGA golf.