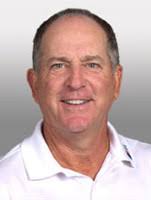 Jay Haas’ credentials on the golf course are as varied as the family tree that links him to the lush green fairways. Born in St. Louis and growing up in Belleville, Haas was a member of the NCAA Championship team of the middle 1970s with Curtis Strange and Bob Byman that Golf World has called “the greatest college team of all time”. He won the individual championship in 1975 and turned professional in 1976.

He continued his good fortune as a pro, winning nine times between 1978 and 1993. He had a resurgence in 2003, when he finished in the top 30 on the money list for the first time since 1995 and made the United States Presidents Cup team. The following year he was one of Hal Sutton’s two captain’s picks for the Ryder Cup, and made his third appearance in that event.

He was named the Champions Tour Player of the Year in 2006 as well. Haas won the 2008 Charles Schwab Cup to win two out of the last three cups After winning the Greater Hickory Classic in September 2009, Haas won his third senior major and 14th Champions Tour event in October at the Constellation Energy Senior Players Championship with a final round 6-under-par 64 . 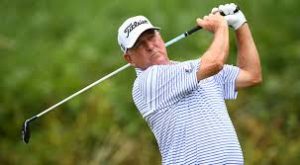 In June 2012, Haas won his 16th title on the Champions Tour, cruising to a five stroke victory at the Principal Charity Classic. In October 2016, Haas won the Toshiba Classic in a playoff with Bart Bryant. He became the second oldest player to win a PGA Tour Champions event at age 62 years, 312 days; the oldest: Mike Fetchick – 63 years.

Haas comes from a distinguished family of golfers. He is a nephew of 1968 Masters winner Bob Goalby, and has several other relations in golf including his second son Bill who has played on the PGA Tour since 2006. His oldest son Jay Jr., brother Jerry Haas, and brother-in-law Dillard Pruitt also played on the PGA Tour.

He has made the cut 592 times in the PGA Tour, more than any other player. Haas currently resides in Greenville, S.C.