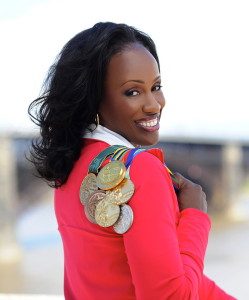 A multi-talented athlete, Jackie Joyner-Kersee was one of the top American track stars of the 1980’s and 1990’s winning numerous Olympic medals and setting or tying records in several events. She was the first American woman to win a gold medal in the long jump and the first woman in history to earn more than 7,000 points in the grueling seven-event heptathlon. She won three Olympic gold medals, one silver and two bronze, and she established a world record in the heptathlon. According to Kenny Moore of Sports Illustrated, Joyner-Kersee, “like her name, is a blend. … She wants to win, but having won, wants to go on. She wants to impress, but having performed gloriously, still wants to go on.”

Jackie has made famous the heptathlon, in which athletes amass points by running a 200-meter dash, completing both high and long jumps, throwing a javelin and a shot put, running the 100-meter hurdles, and finishing an 800-meter run, all in the space of two days. The event demands skills in a variety of areas that most athletes choose as specialties.

Joyner-Kersee became a star in the heptathlon in 1984, when she won a silver medal after losing the 800-meter run by a fraction of a second. In the 1988 and 1992 Olympics, she won golds in the event. Even more remarkable, she has managed to single out one specialty — the long jump — and win Olympic medals in that event as well. In 1988, she earned a gold medal in the long jump, in both 1992 and 1996 she settled for a bronze.

Born on March 3, 1962, Joyner-Kersee grew up in poverty-stricken East St. Louis, Ill. Her parents, Alfred and Mary Joyner, were barely in their teens when they got married. Mary was only 14 when her first child, Al, was born and just 16 when she gave birth to Jackie. Both parents worked hard to provide for their growing family, Alfred in construction and on the railroads and Mary as a nurse’s aid.

Jackie’s grandmother had named her “Jacqueline,” after Jacqueline Kennedy Onassis, the wife of former President John F. Kennedy, hoping that the youngster would someday be “first lady” of something.

At the age of 14, she won the first of four straight national junior pentathlon championships. Track and field events were only part of the weapons in her arsenal. In high school she was a state champion in both track and basketball. Her Lincoln High School basketball team won games by an average of 52.8 points during her senior year. She also was 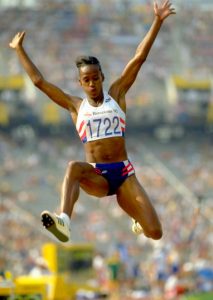 an excellent student who finished in the top 10 percent of her graduating class.

Jackie was heavily recruited by major colleges and chose the University of California at Los Angeles (UCLA). She began school there in 1980 on a basketball scholarship. Tragedy struck in her freshman year when her mother developed a rare form of meningitis and died at the age of 37. Stunned by the sudden and unexpected loss both Jackie and Al Joyner dedicated themselves to athletics with new resolve. Having returned to UCLA, Jackie became a starting forward for the Bruins and worked with the track team as a long jumper. She was rather surprised to find herself singled out by an assistant track coach named Bob Kersee, who detected untapped possibilities in her. Kersee literally put his own job on the line, demanding to coach Jackie in multi-events, or he would quit. The university athletic department agreed.

By 1983, Joyner-Kersee qualified for the world track and field championships in Helsinki, Finland. Her first chance to be a world champion ended in disaster; however, when she pulled a hamstring and could not complete the heptathlon. Ironically, her brother Al was competing there and he too was injured.

In 1984, both Jackie and Al Joyner qualified for the U.S. Olympic team. Confounding all predictions, Jackie won the silver medal in the heptathlon, missing the gold by only .06 seconds in her final event, the 800-meter run. Meanwhile, Al Joyner became the first American in 80 years to win the Olympic triple jump.

The depth of her potential became apparent in 1985, when she set a U.S. record with a long jump measuring 23 feet, 9 inches. By then she had quit playing basketball and was devoting herself exclusively to track under the guidance of Bob Kersee. Their relationship became romantic and they were married on Jan. 11, 1986. When Al Joyner was wed to sprinter Florence Griffith, the stage was set for the emergence of a track and field “family” of champions: Jackie Joyner-Kersee and Florence Griffith Joyner. The two women were among an elite cadre of track stars coached by Bob Kersee in preparation for the 1988 Olympic Games.

In 1985, Jackie was ranked third in the world heptathlon. But in 1986 at Goodwill Games in Moscow, she set a world record in the event with 7,148 points — more than 200 points higher than the old record. Three weeks later, she broke her own record with 7,161 points in Houston, where temperatures reached 100 degrees during competition. Her devotion to the heptathlon was recognized by numerous awards, including the 1986 Sullivan Award for best amateur athlete and the coveted Jesse Owens Award.

Jackie’s performance at the 1988 Olympics was nothing short of phenomenal. Not only did she win a gold medal in the heptathlon, she also took the gold medal in the long jump with a leap of 24 feet, 3.5 inches. Her heptathlon score of 7,291 points was her fourth world record and many predicted it would probably stand for many years.

Into the 1990s, Jackie continued to compete in track and field, stating that she wanted to end her Olympic career on American soil. She entered the 1996 Olympics in Atlanta, but was suffering from a right hamstring injury. She came away with another bronze in the long jump and withdrew from the heptathlon.

Since leaving track and field, Jackie has been busy with other projects. She was a spokesperson for Nike’s PLAY (Participate in the Lives of America’s Youth) program helping raise funds for youth activity centers and providing scholarship money to youth through the Joyner-Kersee Community Foundation. She also worked with children in her hometown of East St. Louis.