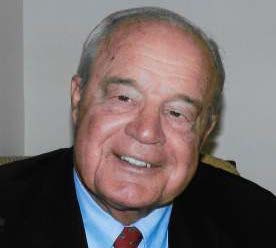 The name Jack Jones and success on the athletic fields at Webster Groves High School have come to be synonymous. Ever since Jones became the Statesmen head football coach in 1965, Webster began reeling off victory after victory. The Webster football team compiled a 168-85-4 record under his 25-year tenure and the program’s success during that time speaks for itself. His accomplishments include twelve conference championships, five district championships, and two Missouri state championships (1979, 1988).

Jones, who also was a classroom teacher and guidance counselor, also coached the Statesmen to two Missouri State swimming championships (1968, 1969). For his successes, Jones was named the Metro Coaches Association Coach of the Year in 1978 and the Sporting News Coach of the

“When I arrived on the scene at Webster Groves I was fortunate to fall under the influence of some outstanding men from whom I learned much,” Jones says. Jones credits many of his colleagues for influencing him along the way: Ray Moss, Tyke Yates and Lenard Bryant at Webster and his Beaumont High School coaches Bill Miller, Tom Stanton and Ray Elliott.

Upon graduating from Beaumont High School, Jones went to Northwest Missouri State where he earned athletic scholarships in both football and track. “Again, I was lucky enough to be influenced by two men who helped me learn about coaching and how to develop needed communication skills,” he said, referring to head football coach “Red” Wade and head track coach Kenny Gardner.

Jones came to Webster in 1963 and was assigned as assistant coach in both football and track. Two years later, he became head football coach for the
next 25 years and was appointed athletic director from 1979 to 2000.