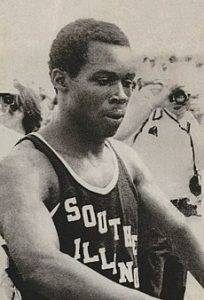 Ivory Crockett, a 1968 graduate of Webster Groves High School, was known around local circles for his blazing speed. But he became internationally known on that May 1974 day in Knoxville, Tenn., when he ran a 9.0-seconds flat to break Bob Hayes’ 11-year record of 9.1 set in 1963. And Crockett had officially claimed the title of “the world’s fastest human.”

The Los Angeles Times chronicled Crockett’s feat with the headline: “Immortality in 9 Seconds Flat.” The St. Louis Globe-Democrat’s headline read, “Crockett’s 9-flat Cruise Puts Him in Track Elite.” So in just nine seconds, Crockett became an immortal figure and joined one of the world’s most exclusive clubs. In the past 100 years, only eight Americans have

managed to bring down the time barrier at 100 yards.

It was prophetic that, prior to the race, Crockett placed a piece of paper in his shoe with the number 9.0 written on it. “I felt pretty confident that I was going to do it,” he said. “I had my speech ready.” He’d already set the world record for a hand-timed 100-yard dash, but this mark was electronically timed. Crockett’s name remains etched in the record books today.

After his sophomore year at Brentwood High, his family moved to Webster Groves. In his senior year, he was clocked at 9.5 in the 100-yard dash, the second-fastest high school time in the world that year. Colleges began heavily recruiting him. In 1969 and again in 1970, while running at Southern Illinois University – Carbondale, Crockett defeated Olympian John Carlos in the 100 in the National AAU Championships.

Crockett was born in tiny Hall, Tenn., but moved to Missouri when Crockett was a youngster.

The City of Webster Groves honored the world champion for his accomplishments by naming a park in his honor. Ivory Crockett Park is located at Bell and Thornton Avenues. Likewise, Crockett is honored to give back to the Webster Groves community through the annual RUN4Webster, his effort to return support to the schools that nurtured and provided early life lessons while he was a student there.