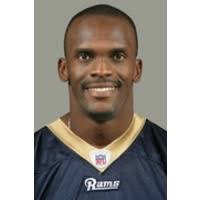 “A complex, gifted athlete, probably the best vertical, one-on-one, bursting-type receiver in the league. The best player I have ever coached.” – Coach Dick Vermeil

Everyone told him he was too skinny to play in the National Football League … that he would be easily injured and not last a season with the “big boys.” But Isaac Bruce would have none of it. And his 73-yard touchdown reception in the waning moments of Super Bowl XXXIV that gave the Rams’ a 23-16 victory will live in the hearts of St. Louis fans forever.

Isaac Isidore Bruce, a slim youngster from Fort Lauderdale, Fla., was a second-round draft selection (33rd overall) by the Los Angeles Rams in 1994 out of Memphis State University, where he completed his last two years of college. He earned the 1994 Carroll Rosenbloom Award, given to the team rookie of the year and was also voted Rams Rookie of the Year. His first NFL reception that rookie season was a 34-yard touchdown. He moved with the team to St. Louis in 1995 and proved no less than spectacular. Bruce was named the NFC Offensive Player of the Week for Week 6 following a 10-catch, 191 yard, two TD performance. His total receiving yards for 1995 (119 catches for 1,781 yards) remain second only to Jerry Rice’s record of 1,848 yards for one season. Bruce’s 119 catches also ranks among the leaders on the NFL’s all-time single-season reception list.

Nicknamed “The Reverend” because he wished to become one after football, Bruce broke four Rams’ records, including most receiving yards, most receptions, most consecutive 100-yard receiving games (six) and most 100-yard games (nine). In 1996 Bruce led his team with 84 receptions and the NFL with 1,338 yards. He became the first Rams receiver since Henry Ellard in 1990 and 1991 to post back-to-back 1,000-yard seasons. On October 27, 1996, he caught 11 passes for 229 yards and a touchdown against Baltimore. He was also voted to his first Pro Bowl, after having been an alternate the season before. Bruce missed a total of 15 games with injuries the next two seasons. However, he had another 200-yard game in the ’97 season, totaling 10 catches, 233 yards and recording two touchdowns against Atlanta.

Bruce stood out in the Rams’ Super Bowl season when he was named a first-team All-Pro and was voted to his second Pro Bowl. He caught 77 passes for 1,165 yards and 12 touchdowns in the Rams 13-3 season. He also led “The Greatest Show on Turf” in receiving during the playoffs, with 317 yards on 13 catches, and a team-high two touchdowns, including the game-winning 73-yard touchdown pass late in the fourth quarter of Super Bowl XXXIV.

In 2000 Bruce was again a Pro Bowler and caught 87 passes for 1,471 yards and nine touchdowns. He became the first Rams receiver to earn back-to-back Pro Bowl invitations since the 1988-1989 seasons. Bruce led or was tied for the most receptions six times in 2000, receiving yards six times, and posted four 100-yard receiving games. That same year, Bruce and Torry Holt became only the second wide receiver duo from the same team to each gain over 1,400 yards in the same season.

In 2001 the Rams returned to the Super Bowl, losing to the New England Patriots. However, Bruce made the Pro Bowl for a team-record fourth time, becoming only the third receiver in team history to earn three consecutive Pro Bowl invitations. Bruce became the franchise career leader in 100-yard receiving games (29), 1,000-yard seasons (5), and receiving touchdowns (56).

Bruce became the Rams’ all-time leader in receptions in 2002 while posting his fourth consecutive 1,000-yard receiving season. That year he led the team with seven touchdown receptions, and ended the season with 79 receptions for 1,075 yards. Bruce played for the Rams through the 2007 season when he was released and subsequently signed by the San Francisco 49ers. On Dec. 21, 2008, in a game at St. Louis against his former team and with the St. Louis fans cheering him, he caught his 1,000th career reception – a 3-yard touchdown catch. He played sparingly in 2009 and then on June 7, 2010, he was traded back to the Rams so that Bruce would be able to retire as a Ram.

Bruce finished his career with 15,208 yards, which ranks third most ever in NFL history behind Rice and Terrell Owens.