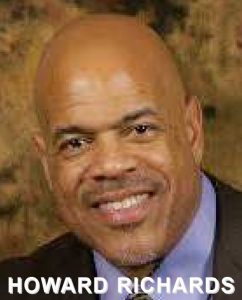 Howard Richards, was a standout offensive lineman who was recruited by the University of Missouri who went on to play seven seasons in the NFL.

The Southwest High School grad started four games as a true freshman at the University of Missouri, the beginning of 40 consecutive games he started at right tackle, under coaches Al Onofrio (1977) and Warren Powers (1978-80). He was a standout offensive tackle and was named All-Big Eight as a junior and senior. In his last year in 1980, he was named offensive co-captain and received second team All-American honors. He played in the Senior and Hula bowl games.

Richards was selected by the Dallas Cowboys in the first round of the 1981 NFL Draft. This was only the third time (John Niland and Robert Shaw) the Cowboys used a first-round pick on an offensive lineman.

In his second season he was the starter at left guard, splitting time the next year with former All-Pro Herb Scott. However, after three solid seasons, injuries started to take their toll and Howard missed 30 plus games over the next 4 seasons. In 1984 he had a chance to replace the retiring Pat Donovan at left tackle, but a torn groin muscle forced him to the sidelines. He eventually started 4 games at left tackle, before missing the last 4 games due to a torn quadriceps injury, that required season-ending surgery.

In 1985 Richards started the season on the physically unable to perform (PUP) list and wasn’t activated until October 24. He was the recipient of the Ed Block Courage Award after the 1984 season. Richards was named the starter at left guard for the 1986 season, but injuries stalled his progress again.He was waived on June 18, 1987, along with many other well-known Cowboys’ veteran players, after Dallas’ first losing season in 22 years.

After six seasons in Dallas, Howard was traded to the Seattle Seahawks in 1987 where he played in only 2 games before suffering a knee injury and Richards decided to retire.

Richards then served for 13 years at the Central Intelligence Agency where he served on the security protective staffs of four CIA directors, along with serving a tour of duty in Tel Aviv, Israel, where his duties included both personnel and physical security, and liaison and security coordination in Gaza and the West Bank between the Israeli and Palestinian governments.

In June 2011, Richards was selected to succeed former Mizzou coach John Kadlec, as the Tigers radio football analyst. Additionally, he is the Senior Manager, External Relations at his alma mater.

Richards is a member of the NFL Retired Players Association and in February 2012, he was honored as a recipient of the College of Arts and Science’s distinguished Alumni awardees at the University of Missouri-Columbia. He also serves as a member on the advisory council for the College of Arts and Science’s Department of Communication and is a member of the St. Louis Alumni Chapter of Kappa Alpha Psi Fraternity, Inc.

In October, Richards will receive the prestigious University of Missouri Faculty-Alumni Award, which recognizes the achievements of faculty and alumni.