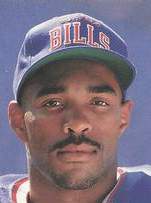 In Buffalo, National Football League fans called him the indomitable Henry Jones. At the University of Illinois they called him a two-time all Big 10 safety. At St. Louis U. High, they called him one of the best Junior Bills ever. After stellar careers at SLUH and Illinois, Henry was an NFL first round draft choice of the Buffalo Bills (26th overall) in 1991.

His pro career started slowly. As a rookie, he played in 15 games but did not start. In 1992, Henry replaced a popular
Leonard Smith in the starting lineup, a move that was questioned by Bills fans. But Henry quickly changed the doubts into cheers. His career exploded with eight interceptions that he returned for an unbelievable 263 yards. He also had two forced fumbles, two recovered fumbles and 92 tackles.The best game of Jones’ career was his two interception game that season. He returned both for touchdowns. The first one for 23 yards, the second for 82 yards in a 38-0 blowout victory over the Colts. Henry was named an All-Pro and garnered a Pro Bowl selecti 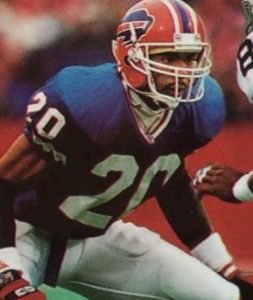 Henry’s tough-nosed style and consistent play won over the hearts of legions of Buffalo fans. He solidified the Bills secondary for a decade. He was always a player strong in run support, and his tackle numbers backed that up. From 1995 to 2000, Henry finished with 100 or more tackles in five of those six seasons. The only season he fell short was 1996 when he suffered a broken leg in the fifth game of the season.

His most important postseason interception came in the 1993 AFC Championship game against Kansas City. With just seconds left in the first half, Henry picked off a Joe Montana pass in the end zone to nullify any momentum the Chiefs might have had going into the final half. The Bills went on to win the game 30-13 and moved on to the Super Bowl.

Henry also made a huge interception in Buffalo’s 1993 AFC Wild Card game against Houston – a game they called the “Comeback Game” in Buffalo. The Bills trailed the Oilers 35-3 and rallied to win 41-38 in overtime. Henry’s interception of a Warren Moon pass in the third quarter set up a touchdown to pull the Bills to within four points. The comeback is the greatest in NFL history. Ironically, many fans in Buffalo did not see the game. It was not a sellout so the game was blacked out on local TV.

Henry Jones is a legend in Buffalo. His jersey No. 20 hangs next to the greatest players in Buffalo history. Fans voted him to the Bills All-Millennium team in 1999. He is one of the best safeties in NFL history!