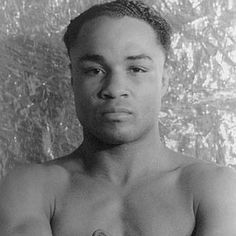 Henry Armstrong, who moved to St. Louis with his family as a youngster, was the only boxer ever to hold three world titles simultaneously. He gained fame in 1938 when he reigned as featherweight, lightweight and welterweight champion. He was managed by Wirt Ross, Eddie Mead, jazz singer Al Jolson and Hollywood actor George Raft.

Armstrong, a relentless puncher, was considered by many to be, pound for pound, the greatest fighter in boxing history. He was among the first three men active in the ring after 1919 to be elected to the Boxing Hall of Fame in 1954. The others were Jack Dempsey and Joe Louis. He was later inducted into the St. Louis Walk of Fame. Armstrong had many nicknames, including Hurricane Henry, Homicide Hank, Perpetual Motion and the Human Buzzsaw.

A native of Columbus, Miss., Armstrong developed his boxing skills after moving to St. Louis. He graduated from Vashon High School with honors. At his graduation, he recited a valedictory poem he had written. Armstrong had a dream of attending medical school, but lacked the financial resources. As an alternative, he decided to pursue boxing as a career and
rose to the top.

Armstrong’s real name was Henry Jackson Jr. He was born on Dec. 12, 1912. While growing up in St. Louis, he shined shoes and worked as a railroad hand until his graduation from Vashon. He then rode freight trains to California, where he became a boxer and won 58 of 62 amateur fights.

He began his professional career in 1931, fighting under the name Melody Jackson until 1935. In 1937, Armstrong won 46
straight bouts, including 27 straight knockouts. That carried him to New York and to three titles. On Oct. 29, 1937, he won the world featherweight (126-pound) crown by knocking out Petey Sarron in the sixth round. On May 31, 1938, he became the welterweight (147-pound) champion by winning a 15-round decision from Barney Ross. And on Aug. 17, 1938, a pared-down Armstrong picked up the lightweight (135-pound) championship with a 15-round decision over Lou Ambers at New York’s Madison Square Garden. 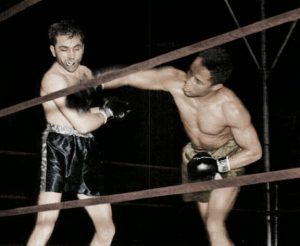 Armstrong’s feat of holding three titles simultaneously can never be equaled since holding multiple boxing titles was barred in the 1940s. Armstrong, who was 5-foot-6, varied in fighting weight from 124 to 146 pounds.

He relinquished his featherweight title three months after taking the lightweight crown. On Aug. 22, 1939, he lost his lightweight title to Ambers on a 15-round decision. After that, he campaigned almost exclusively as a welterweight, although he fought Ceferino Garcia for the world middleweight championship on March, 1, 1940, in Los Angeles. Garcia retained the title when the fight ended in a draw.

Armstrong lost his final title on Oct. 4, 1940, when Fritzie Zivic beat him in 15 rounds to become the welterweight champ. In a return bout on Jan. 17, 1941, before 23,190 spectators — at that time the largest crowd in history for an indoor sports event, — Zivic knocked him out in the 12th round. Armstrong fought for four more years, but never again for a title. “The Ring Record Book” shows him with a final 151-21 record with 101 knockouts and purses of more than $1 million.

After retiring, Armstrong was ordained as a Baptist minister. He spent most of the rest of his life as an evangelist and as head of the Henry Armstrong Youth Foundation, which he founded in the 1950s to combat juvenile delinquency. He was featured in three movies, “Keep Punching” (1939), “The Pittsburgh Kid” (1941) and “Joe Palooka, Champ” (1946). In 2007, Ring Magazine ranked Armstrong as the second-greatest fighter of the last 80 years.