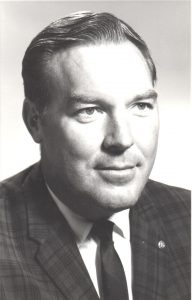 After a Hall of Fame run with the New York Knicks in the National Basketball Association, and a successful four-year run as head coach at Southern Illinois University-Carbondale, Harry Gallatin was hired as the head coach of the St. Louis Hawks for the 1962-63 season. The Hawks, who won the NBA championship in 1958, were going the other way and owner Ben Kerner was looking for someone to rekindle their winning ways.

“It seemed that when I came in as coach, things on the team were kind of loose, with everybody going their own way and not really contributing to the team effort,” recalled Gallatin. “I wanted to immediately bring everyone on the same page, including basic conditioning and fundamentals.” Bigger and quicker was Gallatin’s “war cry.” With that theory, it wasn’t unusual for someone to see the players running up and down the steps at Kiel Auditorium carrying another player on their backs during practice.

In addition to conditioning, the Hawks also went through some dramatic personnel changes. “I was fortunate to have three new players come in at the same time as I did, so they were my guys learning my way,” continued Gallatin. “Charlie Vaughn played for me at Carbondale, and I remember the importance of drafting Zelmo Beaty. I told Mr. Kerner that before we commit to a player, I need to go down and play one-on-one with the player prospect. I went down to Prairie View A&M and played with Beatty. People kept saying, ‘Who is Zelmo Beaty?’ But what a great choice he turned out to be.”

The changes impressed Hall of Famer to be, Lenny Wilkens, who saw a noticeable change when he returned from the military for the 1962-63 campaign. “When I got back to the team I found it had changed quite a bit and for the better. I couldn’t get there for training camp because they had canceled all leaves in the military. What I noticed when I did get there was a more unified team and a coach with bulldog tenacity. If Harry made up his mind about something he wasn’t about to change it.”

One of the big changes was the chemistry that Gallatin instilled in the Hawks. Bob Pettit and Cliff Hagan were still the driving forces for St. Louis, but with Wilkens, Vaughn and John Barnhill using their quickness and ball-handling skills, the Hawks were rejuvenated. Gallatin’s team went 48-32 and finished second in the West by five games to the Los Angeles Lakers, including an astonishing 30-7 record on their homecourt – Kiel Auditorium. The Hawks made it to the division championship series, but their run to the NBA finals fell short when they lost to the Lakers in a seven-game series. Even so, the Hawks had gained the spirit and passion for the game that Gallatin had as a player.

With a persistent work ethic, tremendous physical strength, and a strong competitive attitude, Gallatin was a workhorse both in college and in the NBA. He was nicknamed “Horse.” Gallatin was a two-time All-Conference selection at Northeast Missouri State Teachers College and was selected in the first round of the 1948 draft by the Knicks. His durability was instrumental in his playing in a record 682 games. He played nine of his 10 seasons with the Knicks, was an All-NBA First Team selection in 1954 and a seven-time All-Star game selection. Known primarily for his rebounding prowess, Gallatin ranked among the top 10 in rebounding six times and led the league in 1954. Harry pulled down at least 660 rebounds a season, including a career-high 1,098 in 1954.

After concluding his career in Detroit, Gallatin began coaching college at SIU-Carbondale and then moved to the NBA where he coached the Hawks and the Knicks. He led the Hawks to second place finishes in 1963 and 1964 and was named NBA Coach of the Year in 1963.