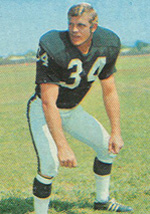 Great football players both preceded him and followed him to the University of Missouri, but Gus Otto, who doubled up as a linebacker and fullback for coach Dan Devine from 1962 to 1964, will forever be No. 1 on at least one list. He was the first Mizzou man to start in a Super Bowl. Otto started at outside linebacker for Oakland in Super Bowl II and made eight tackles (three solos, five assists) in a 33-14 loss to Green Bay, Vince Lombardi’s final game as coach of the Packers.

Otto was a member of the “Eleven Angry Men”, which Oakland’s defense became known as during the 1967 season, when it led the American Football League in defense and racked up 67 sacks—a club record that still stands. Among the other defensive starters for Oakland in that Super Bowl were end Ben Davidson, cornerback Willie Brown, and a strong safety named Warren Powers, who later became head coach at Missouri.

The Raiders drafted Otto in the fourth-round (27th pick overall) of the 1965 AFL draft. Back then, the AFL was at war with the NFL and would hide out players it didn’t want the NFL to connect with, often conducting its draft in secret. The Raiders didn’t exactly stash Otto. He was attending a wedding in Elsberry, Mo., when the club called to tell him he had been drafted.

Otto made an immediate impression as a rookie in 1965, when he intercepted three passes and returned two of them for touchdowns. One of the pick-sixes was a 68-yard return that helped the Raiders beat the Broncos, 28-20, in Denver. Not surprisingly, Otto was selected to the 1965 All-AFL Rookie Team. Four years later, he played in the 1969 AFL Pro Bowl, the final AFL all-star game before the AFL and NFL merged into one league.

In those days, Oakland’s linebackers played man-to-man coverage. Otto often found himself matched up against some of the best running backs in the AFL, including O.J. Simpson, Floyd Little, Mike Garrett, Dickie Post and Emerson Boozer.

Otto played eight years for the Raiders, appearing in 102 games and starting 95, before he retired after the 1972 season. He finished his NFL career with six interceptions, four fumble recoveries and fond memories of playing in Oakland for the late Al Davis. “It was a great place to play,” Otto said. “Al was great for the players. ‘Just win, baby.’ He didn’t care what you did as long as you won on Sunday.”

Born on Dec. 8, 1943, in St. Louis, Otto was a sports star at McBride High School where he was selected to the All-Catholic Athletic Conference, All-District and All-State football teams as a senior in 1960. Devine recruited him to Missouri, where Otto was a two-way player for all three of his college seasons. He enjoyed playing fullback—maybe even more than linebacker.

“You always liked to carry the ball,” said Otto, who rushed 127 times for 424 yards and four touchdowns, and caught three passes for 65 yards during his three seasons at Mizzou. He was a team captain as a senior in 1964, a season in which he earned All-Big Eight Conference honors and third-team All-American honors. Otto was inducted into Missouri’s Hall of Fame in 1996 and selected to Mizzou’s All-Century team in 1999.

After retiring from football, Otto became an investment advisor. He has since retired from that business and lives in St. Louis with Suzanne, his wife of 45 years. A survivor of quadruple bypass heart surgery 14 years ago—his grandfather died of a heart attack at age 48—Otto now divides his time between playing golf, playing with his six grandchildren and following the Missouri football team. Once a Tiger, always a Tiger!