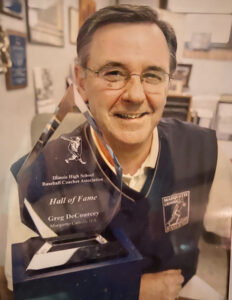 The first year Greg DeCourcey guided the Alton Marquette Catholic High baseball program gave little indication what was in store for the Explorers. He was 30 years old and the Explorers were just as green.

They finished 8-13 in 1976-77.  Yet something was bubbling beneath the surface. A rapid rise was on the way, one that would forever change the face of Marquette baseball. And, DeCourcey was in the middle of a successful evolution that revolutionized the program. It’s no wonder the longtime Marquette coach, whose teams compiled a 641-351 record during his 33 seasons as head coach, is one of the newest members of the St. Louis Sports Hall of Fame.

Two state titles and a runner-up spot within eight years solidified the Explorers’ prowess as a small-school state baseball power. Marquette won 20 games in 1978 and qualified for the IHSA Class A state baseball finals in Springfield. The Explorers then won 22 games in 1979 before setting course for a memorable 1980s. They had started something big. “We had great athletes who were great kids,” said DeCourcey, who began teaching physical education/health and coaching football at Marquette in 1972. He eventually became an assistant principal. 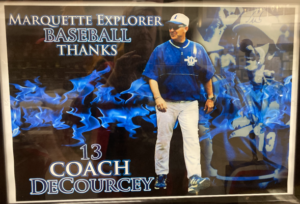 The 1980 Explorers finished 31-5 and claimed the small-school state championship with an 8-7 victoryover heavily favored Mount Carmel, the Class AA state runner-up in 1979. Marquette overcame a 7-4 deficit to win the first Illinois title in school history. Outfielders Pat, Dan and Steve Morrissey, shortstop Ross Brakeville, third baseman Chuck Mathews, along with pitchers Tim Harrawood and Ned Schulz, led a talented and diverse cast to the Explorers’ first state title in any sport.  Harrawood, a right-hander, and Schulz, a lefty, both posted 11-1 records. Pat Morrissey went 5-for-9 and scored seven runs in three games to earn the state tourney’s MVP award.

More good times followed in the 1980s, which belonged to the baseball Explorers. Following the first state title, Alton Mayor Paul Lenz declared June 4, 1980 as “Marquette Victory Day.” There would be more victories and celebrations for the rest of the decade.

“The 1980 team had lots of speed and the 1984 one was more of a power-hitting team,” DeCourcey said. The Explorers went on the power play the second half of the 1984 season. They capped an improbable comeback by winning their final eight games, including a 7-4 victory over Aurora Central Catholic in the state finals. Marquette was drifting along with a 10-12 record at one point during the season. Then the Explorers, led by Marty Johnes, Jim Fischer, Dan Fitzgerald, Todd Zinn, Chris and Scott Taul,  among others, went unbeaten the rest of the way to finish 18-12. “Not in my wildest dreams did I think that could happen,” DeCourcey said of the 1984 Marquette Miracle.

Four years later, the Explorers returned to the Class A state championship game, but Peru St. Bede defeated them 6-3 for the Illinois crown. Still, Marquette had reached the Illinois title game three times in eight years and would close out the decade with a glistening 243-78 record.   “It was ridiculous,” DeCourcey said of the 1980s. “We had a lot of success early on and we tried to maintain it after that.”

Overall, during DeCourcey’s era as head coach – from 1977-2009 – the Explorers snared 15 regional championships, seven sectional titles and thus qualified for the Elite Eight at state seven times. He was elected to the Illinois Baseball Coaches Hall of Fame in 2012. When DeCourcey retired in 2009, only three other prep coaches had won more games at one school.

DeCourcey said his players always gave their best and played hard and smart. He made sure that they enjoyed what they were doing. “We always tried to keep our cool and not lose control,” he said. “If the coaches did that, the players would stay the same way no matter what happened.”