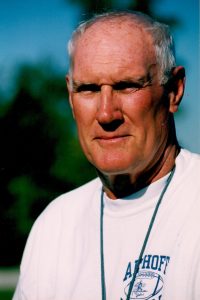 If you ask Glenn Schott, his 37 years as the head football coach at Belleville Althoff Catholic High School was like a dream come true. “You couldn’t ask for a better place to coach and raise a family,” he said when accolades were tossed his way after he announced his retirement as head football coach of the Crusaders in 2007.

Schott, who began teaching and coaching for 47 years beginning in 1962, also served as the Althoff’s athletic director and posted a career record of 245-127-6, which at the time placed him 13th for most victories in Illinois high school history and ninth for most wins at one school. His Althoff squads qualified for the playoffs 16 times and reached the state semifinals six times,

Schott, who originally hailed from Perryville, Mo., which is where he began his coaching career in 1962 at St. Vincent High School, said he was proud that some 28 players from his Crusader teams went on to play Division I football, but that he was “also very proud of the young men who went to Millikin, Washington University and Benedictine as well because the most important thing is to get a quality college education.” Schott said that four of those players wound up playing professional football.

Schott, however, is proudest that his impressive record, championships and awards are only a reflection of the long legacy that he left at Althoff. Bryan Hagardy, a former Schott assistant coach who went on to be a fine head coach himself, perhaps expressed it the most: “The dedication of all those years is indeed a tribute to the kids whose lives he touched.”