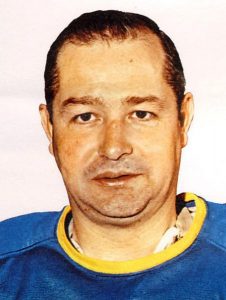 Glenn Hall came to the St. Louis Blues near what he thought would be the end of his career. But it was his performance between the pipes that spearheaded the Blues into one of the hottest properties in the National Hockey League. Hall, who had already established himself as one of the of the great all-time goalies in the NHL while playing with the Detroit Red Wings and Chicago Blackhawks, was just what the Blues needed when he was claimed from Chicago in the expansion draft on June 6, 1967 and became the Blues first goalie in their history.

Hall led the Blues to the Stanley Cup Finals that first season but they faced the dominating Montreal Canadiens. Even though they were a brand new team, the Blues played a solid series. Despite Hall’s brilliant play the Blues lost four straight games – all by one goal. No one thought the Blues even had a chance to be that close against the mighty Canadiens. Even though the Blues were swept, Hall’s steller play in the nets earned him the Conn Smythe Trophy, which rarely is awarded t 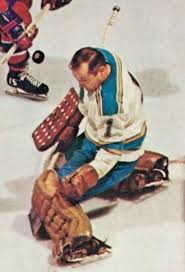 o a player on a losing team.

The next season Hall partnered with Jacques Plante to lead the Blues back to the Finals. The duo shared the NHL’s Vezina Trophy as the league’s top goaltending tandem that season. But the Blues lost again in four games to Montreal in the Stanley Cup finals. All Hall did that season was post eight shutouts and a sparkling 2.17 goals-against average, which ranked the second best during his illustrious career (he hada 2.10 GAA as a rookie with the Red Wings his first full season in the NHL in 1955-56.

One of the most iconic hockey photos is of Bobby Orr’s series-winning goal for the Boston Bruins in Game 7 of the 1970 Stanley Cup finals against the Blues. Hall was the goalie Orr beat before taking his spill.

Hall is credited with establishing the butterfly style for goaltenders and used that to win 401 games in his career.

Hall played four seasons with St. Louis before finally retiring for good after the 1970-71 season. Hall’s presence helped establish the Blues as a legitimate team in their infancy. Hall was named to the All-Star team his first two seasons with the Blues (he appeared in 11 All-Star Games overall) and won the Vezina Trophy in the 1968-69 season, a trophy he had won on two previous occasions.

A tough competitor, Hall had a streak of consecutive complete games during his time with the Red Wings and Hawks. Though he suffered many injuries, he was in the nets for 502 straight regular-season games and another 50 in the playoffs. The endurance record finally came to an end on November 8, 1963, when he injured his back. Ironically, he pulled a muscle not in a game but while getting dressed when he bent over to adjust a strap.

Hall spent 10 seasons in Chicago and was placed on the All-Star Team eight times, five of those on the first team. In 1961, he backstopped the Blackhawks to their first Stanley Cup championship since 1938.

At the end of the 1966-67 season, at the age of 36, he was left unprotected in the NHL’s Expansion Draft when the league expanded from six to 12 teams. Hall was claimed by the Blues, who earned instant credibility.

Hall retired several times, once with Chicago in 1966 and again with St. Louis in 1969. Each time, though, he was talked into returning, usually with a promise of more money, but he didn’t profess to enjoy his livelihood, saying often that he’d meant to retire since he was 15. Hall retired for good in 1971. He stayed in hockey, usually working part-time while he tended to his farm in Alberta, and worked with the Blues and the Calgary Flames as a consultant and goal tending coach.

Glenn Hall was inducted into the Hockey Hall of Fame in 1975.